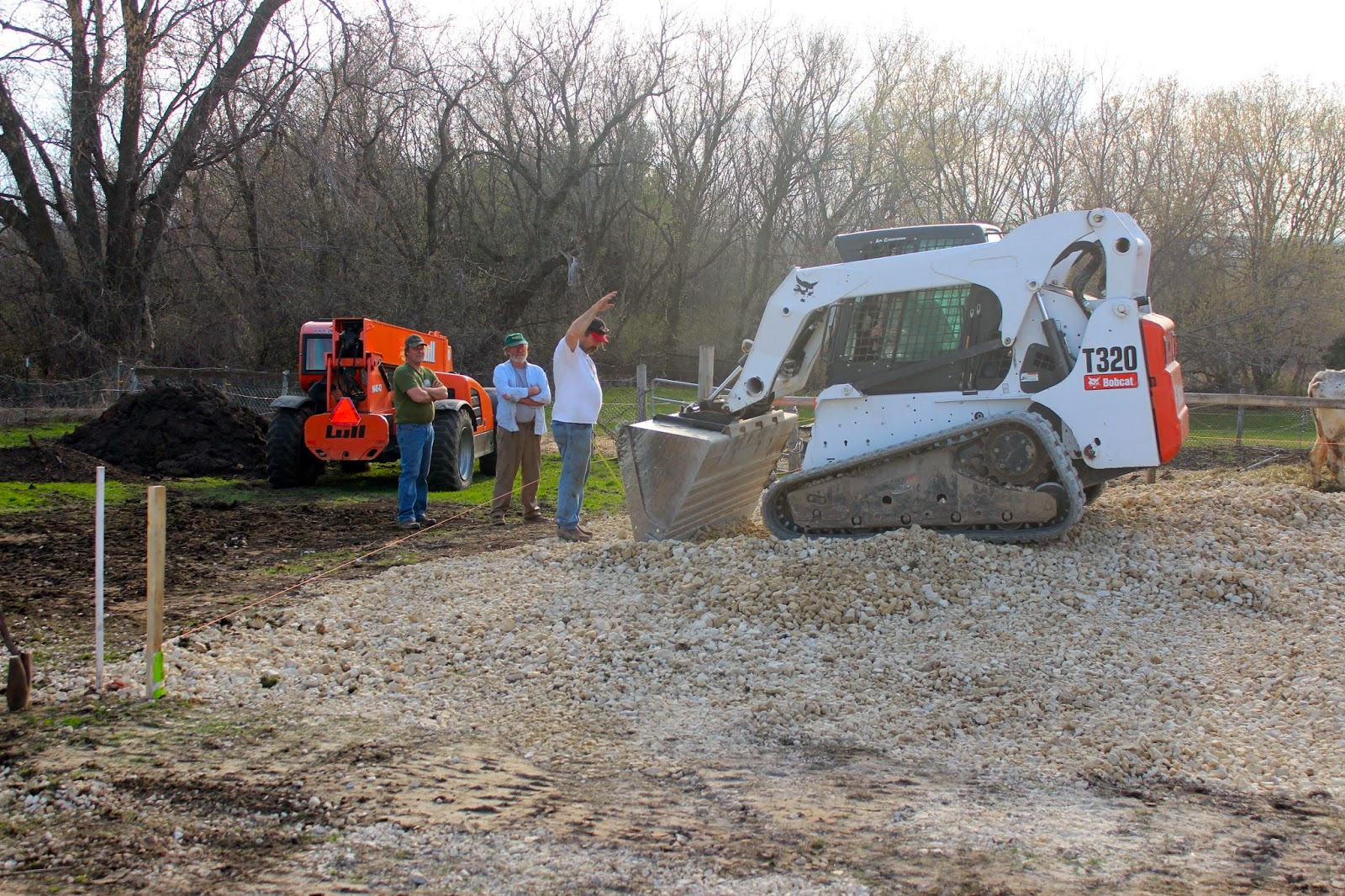 When we found the perfect greenhouse on Craigslist and decided to replace our existing high tunnel with it, we knew it would be a bit of work and expense, but as usual with these kinds of projects, the actual work and cost have far exceeded our original intentions. First of all, the new greenhouse is oriented east-west, and because we have a significant slope, there was a lot of earth moving.  We hired our friends at Rise-n-Shine farm to remove and preserve the valuable topsoil, put down agricultural cloth and a foundation of gravel. This greenhouse will be used both for occasional events and for growing, but the growing will be in containers, not in the ground. 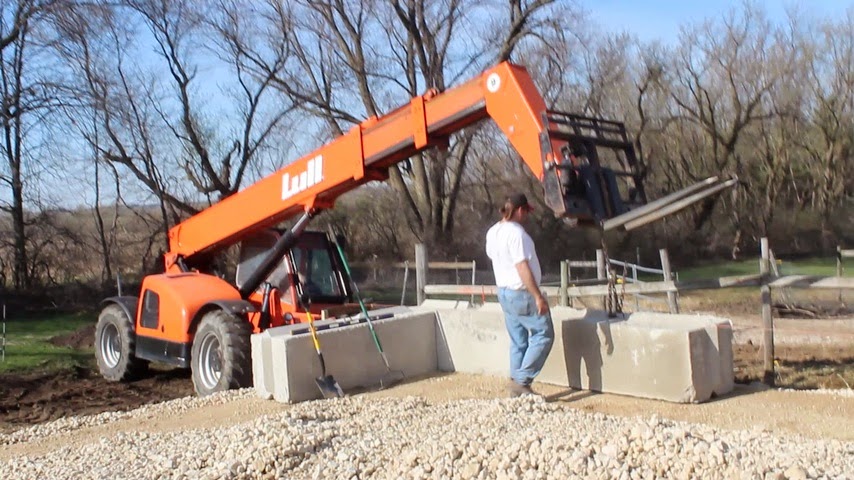 The south and west sides have a foundation built of enormous concrete blocks - pretty heavy-duty for a greenhouse, but  needed to contain the fill. No rabbits will be getting in here! 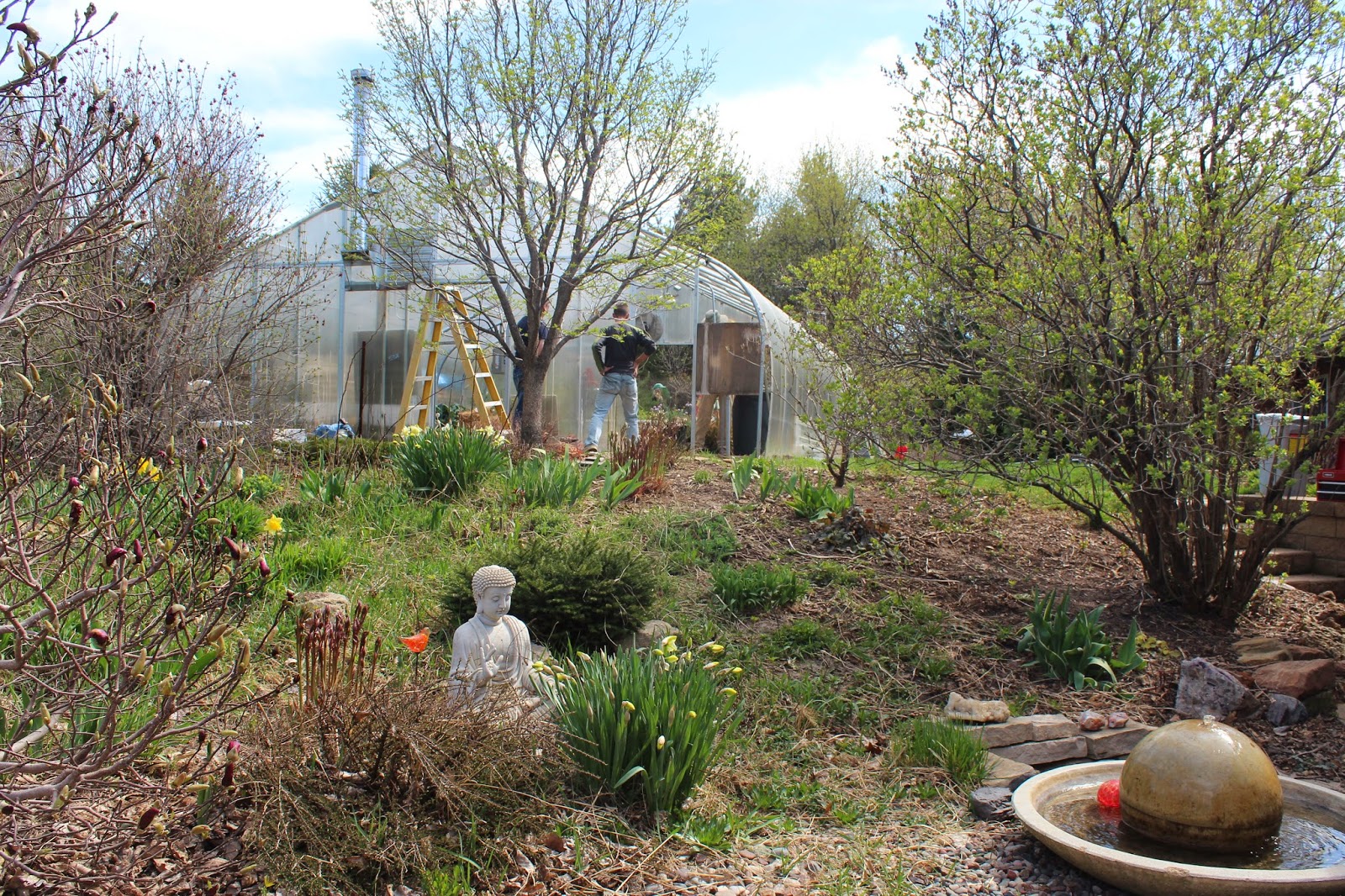 Two weekends ago, we gathered a few friends and dismantled the new greenhouse. I hope our greenhouse setting looks this pretty someday! 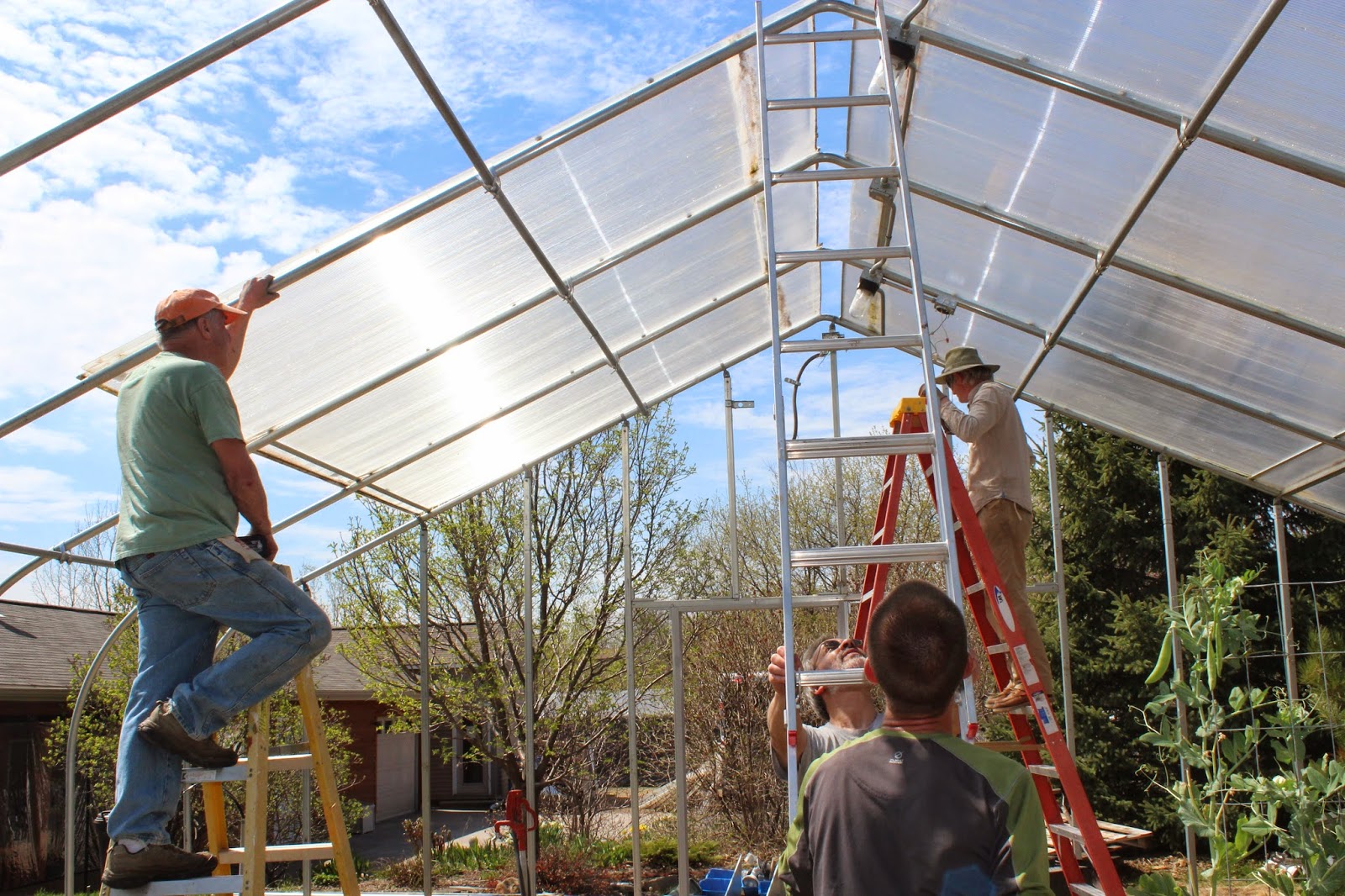 All the pieces were carefully labeled for reassembly. 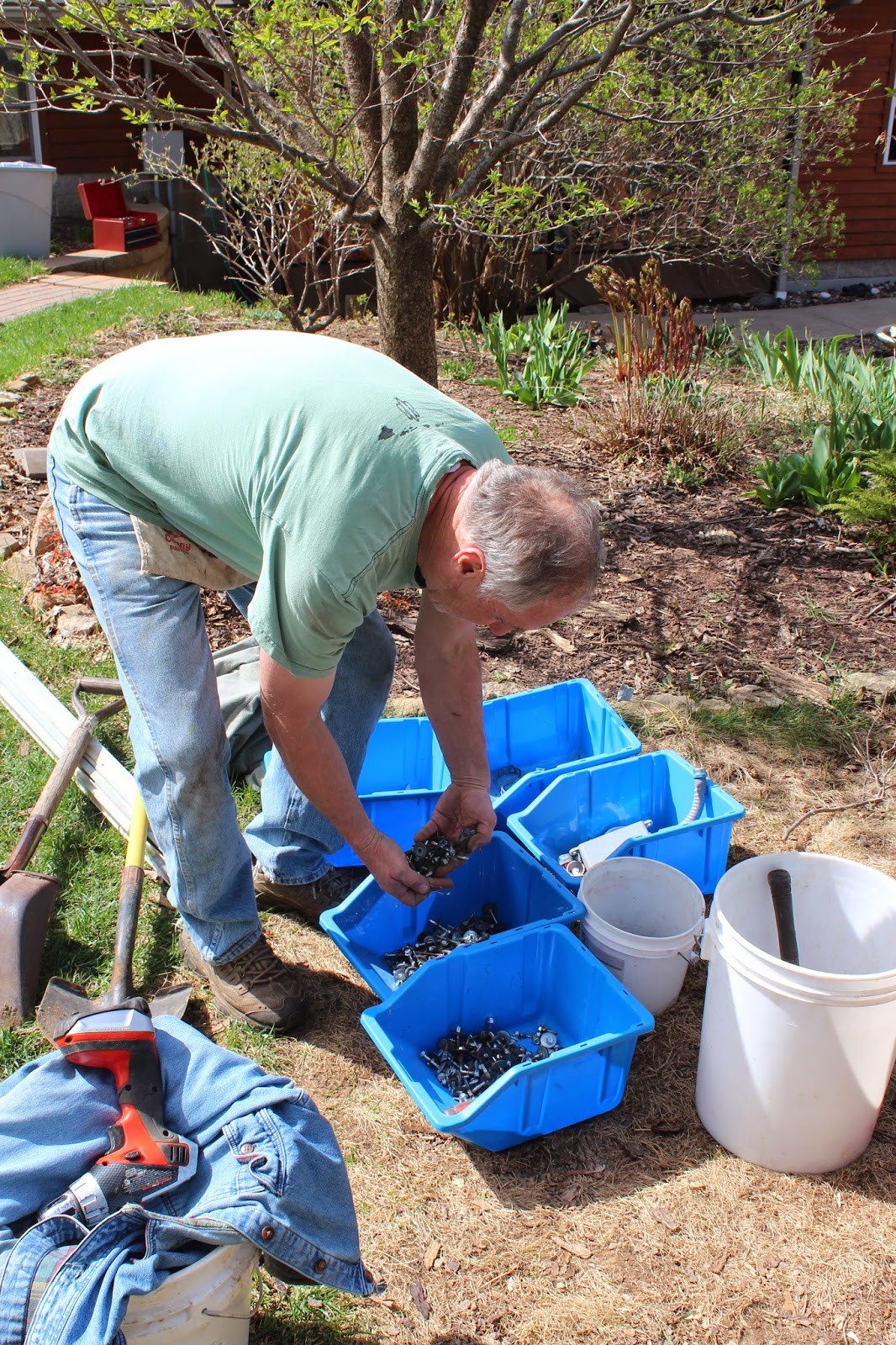 Nuts, bolts, screws and washers were sorted into bins. 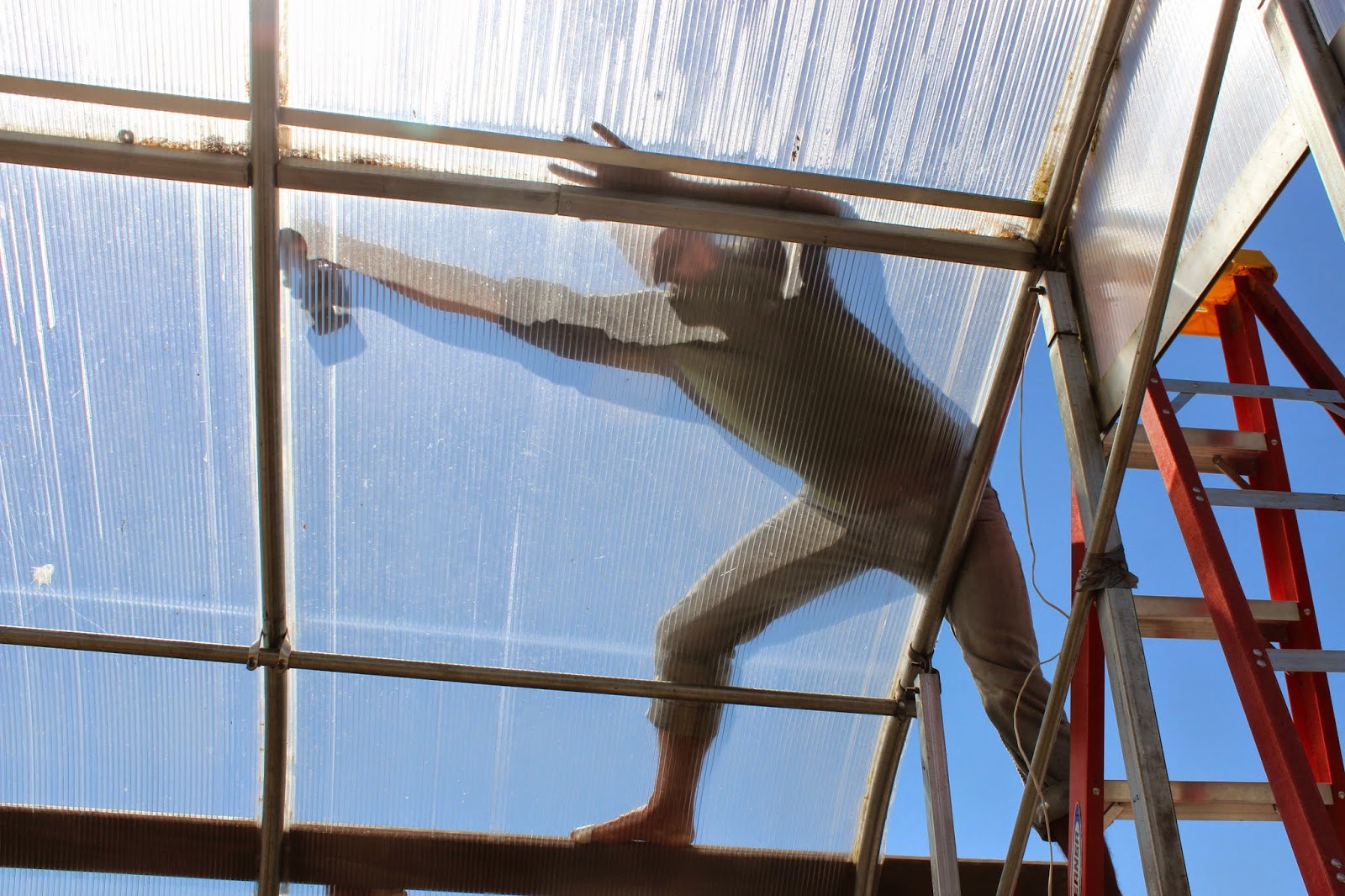 We were so fortunate that our friends’ son Colin called us up that morning and inquired whether we had any projects he could work on while he was visiting for a couple weeks. Did we have a project for him! Colin intrepidly tackled on the most difficult-to-reach parts. 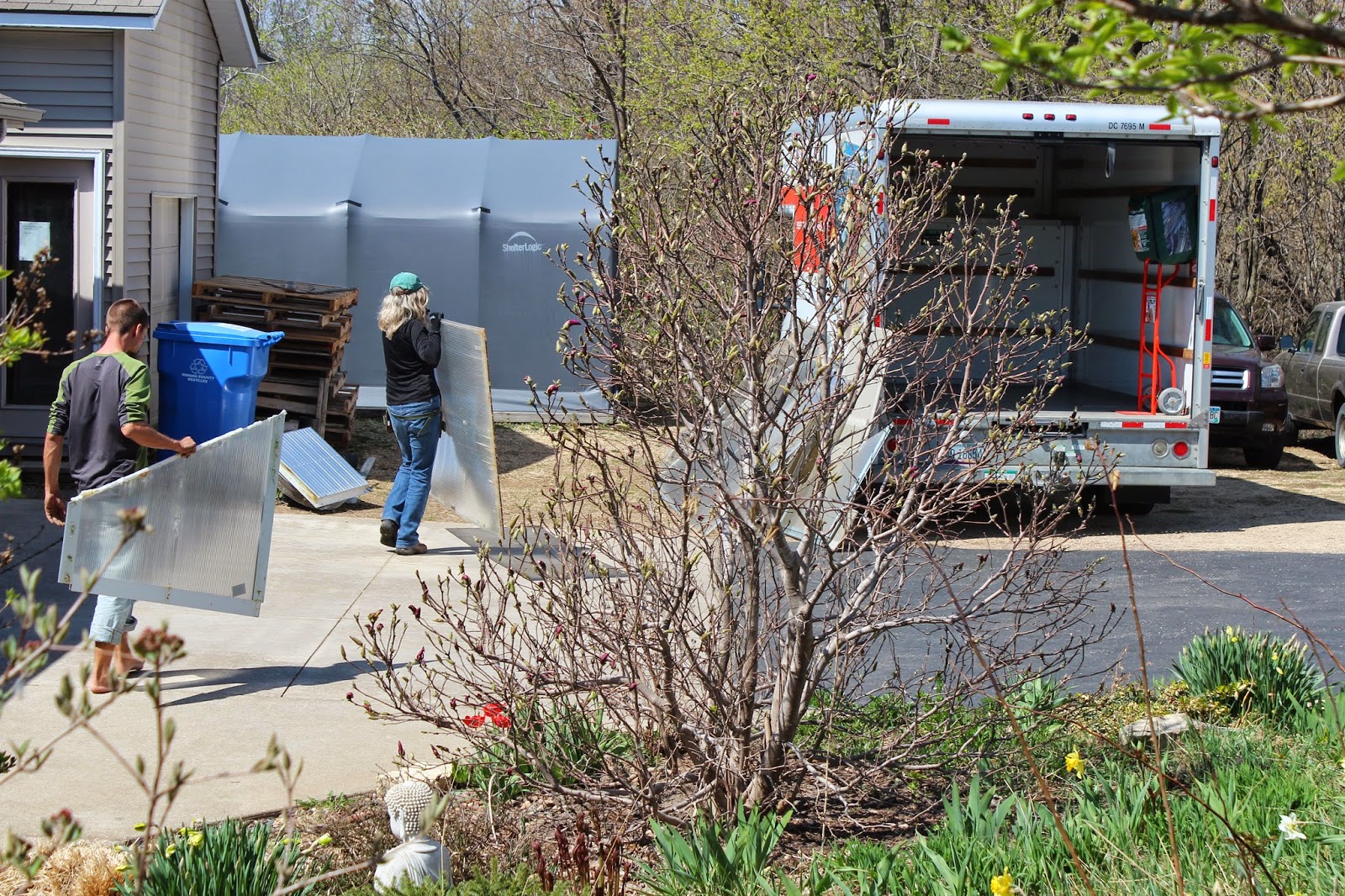 Everything was loaded into a U-Haul truck and brought to our farm. It was a long, hard day, but amazingly we got the entire greenhouse dismantled and moved on Saturday. The plan was to erect it Sunday...um, yeah, right.  We had a wonderful crew of volunteers to help, but we got rained out. 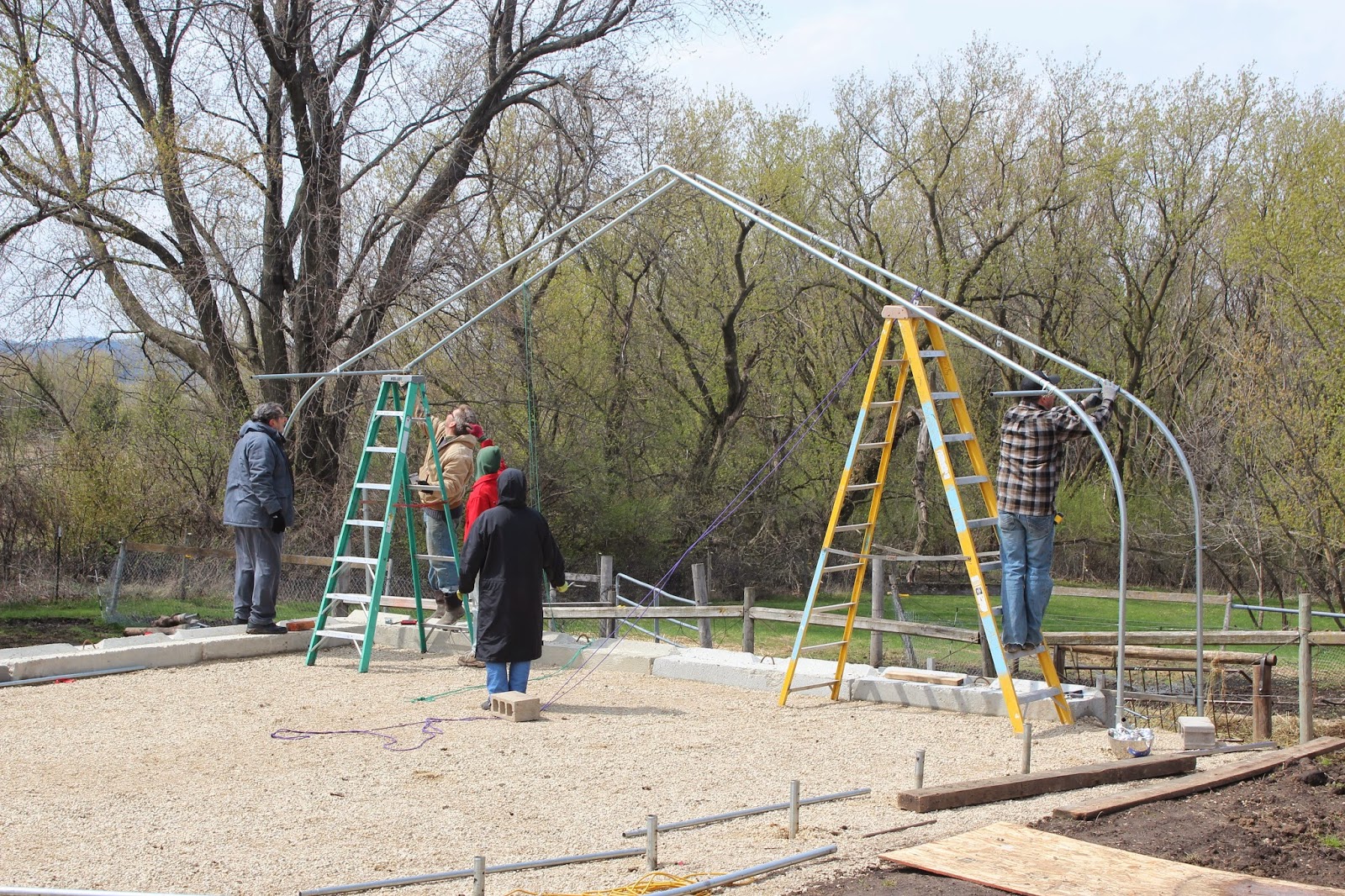 This weekend we tried again, with much greater success.  The first two arches are put up. 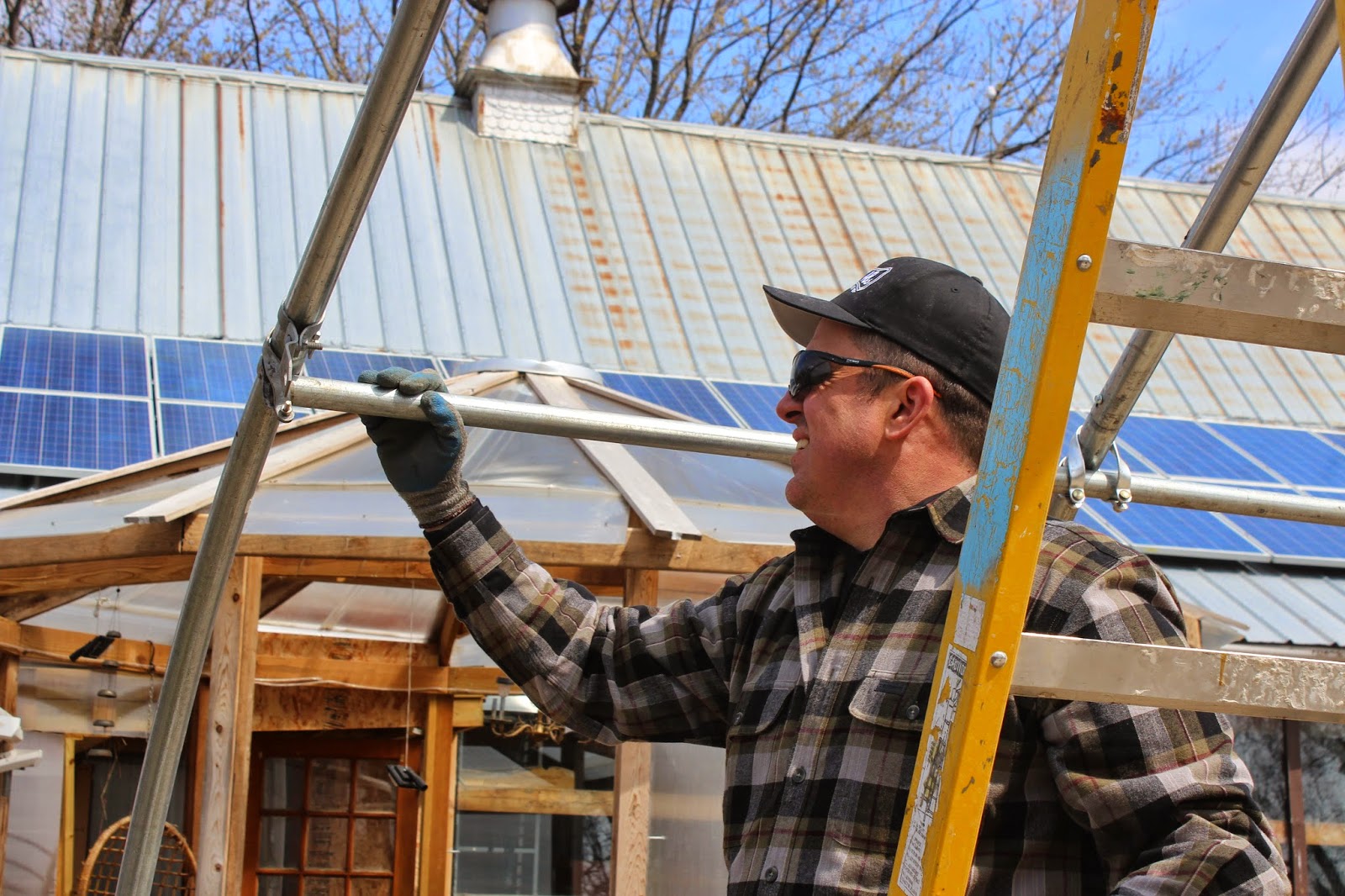 We had  lots more great help - our neighbor Heath attaching a purlin. 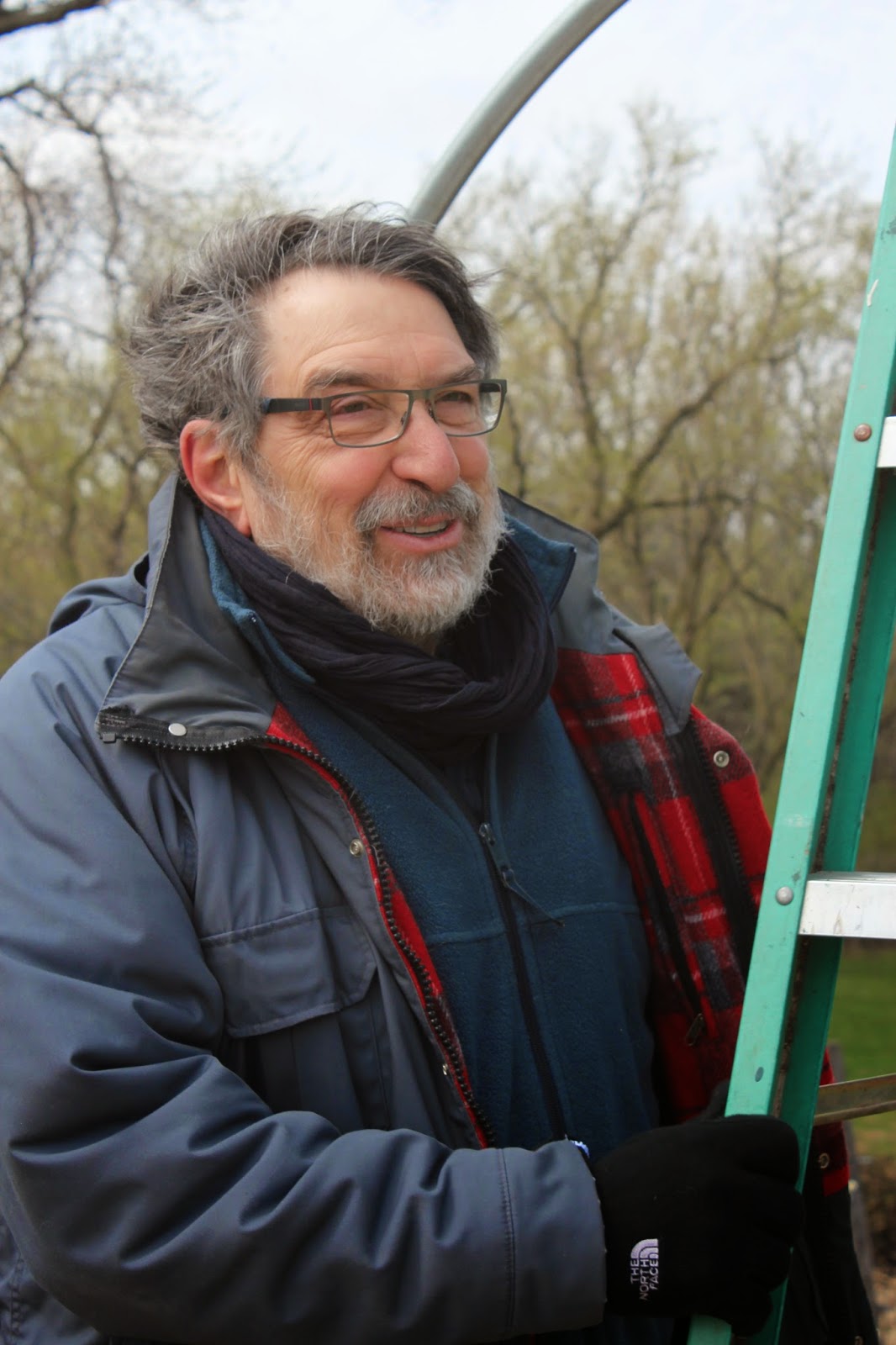 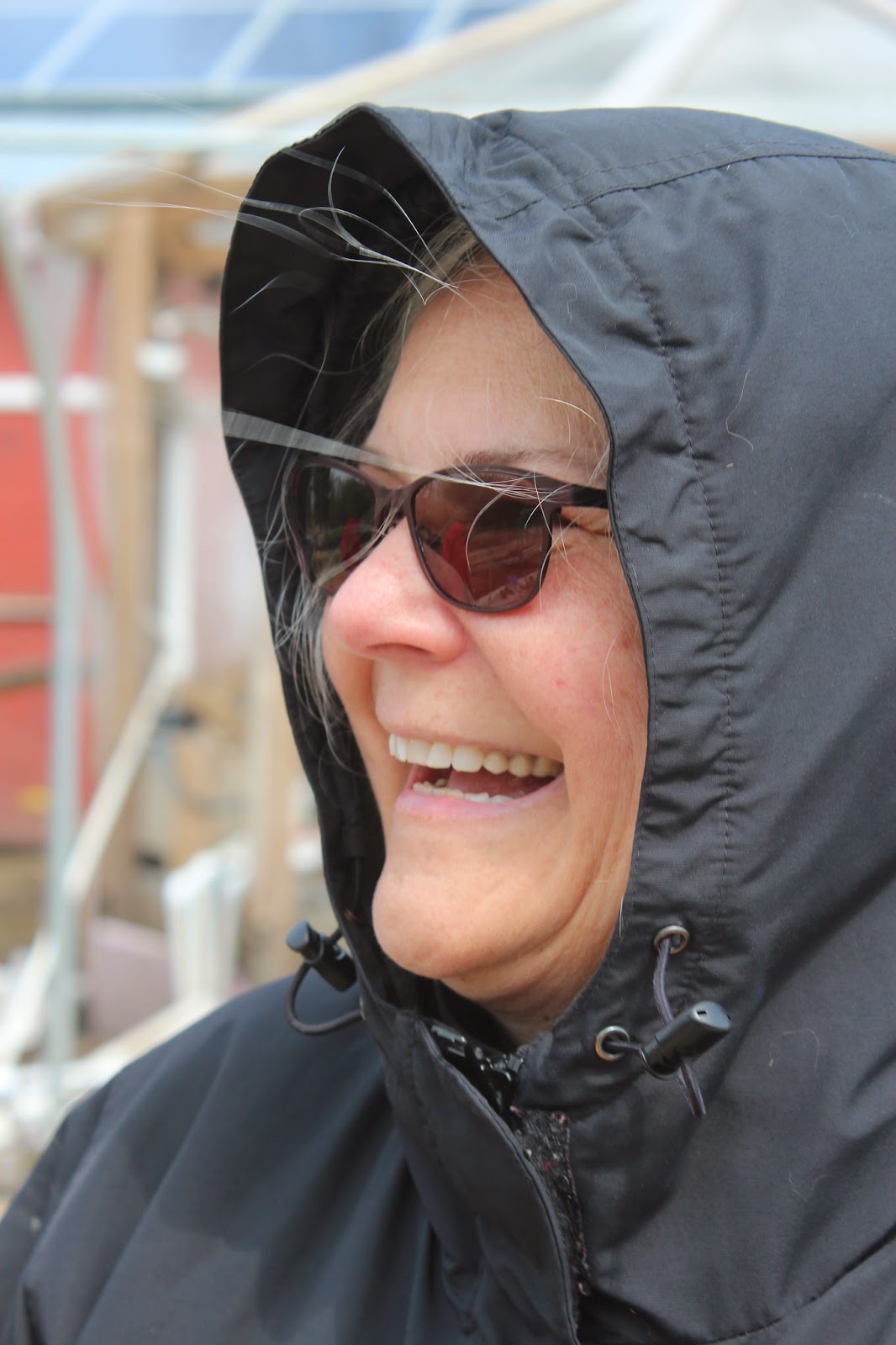 Elizabeth - perhaps you can tell by how Jerry and Elizabeth were dressed that it was COLD. 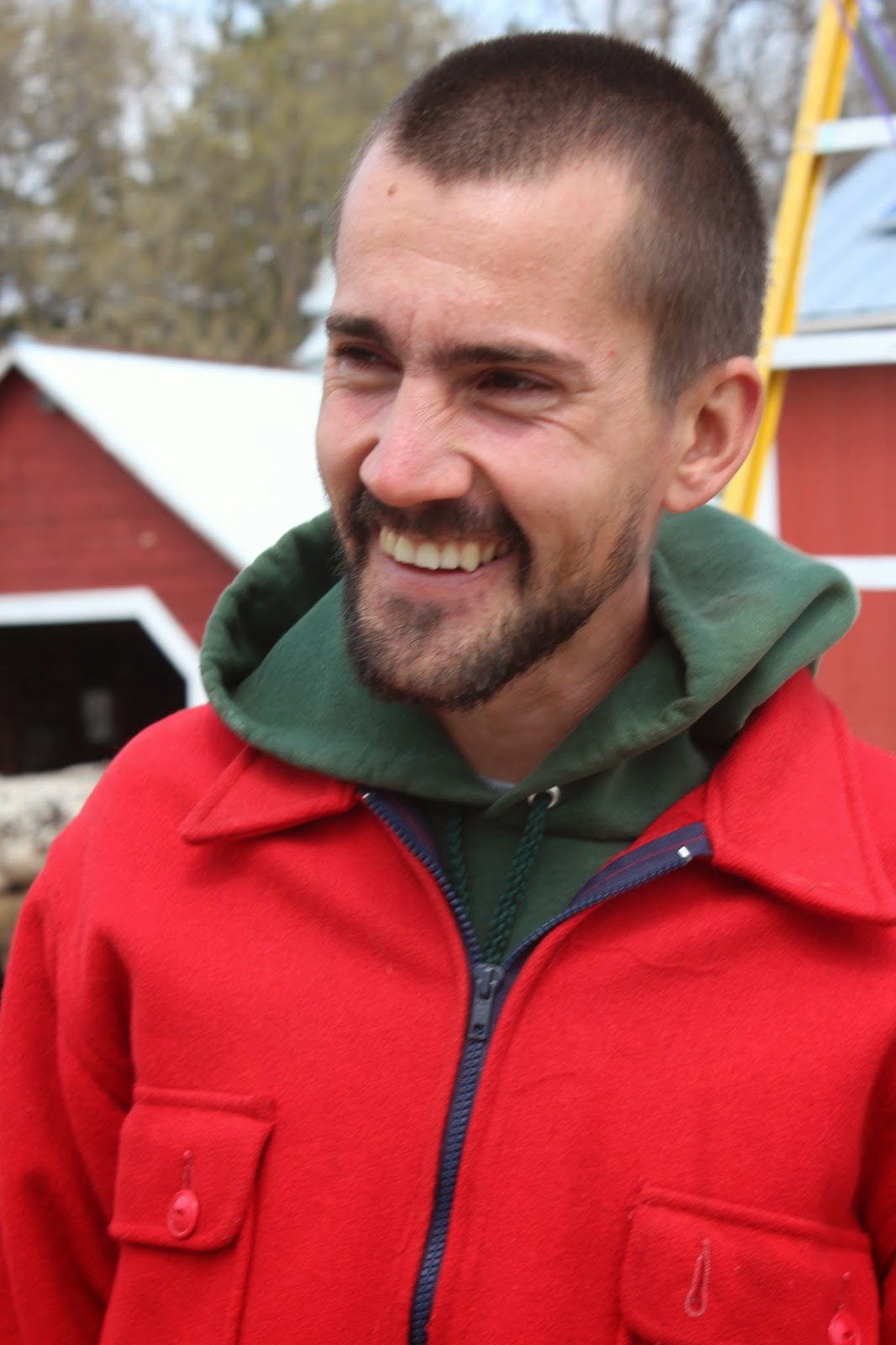 Colin. I want to adopt this guy. 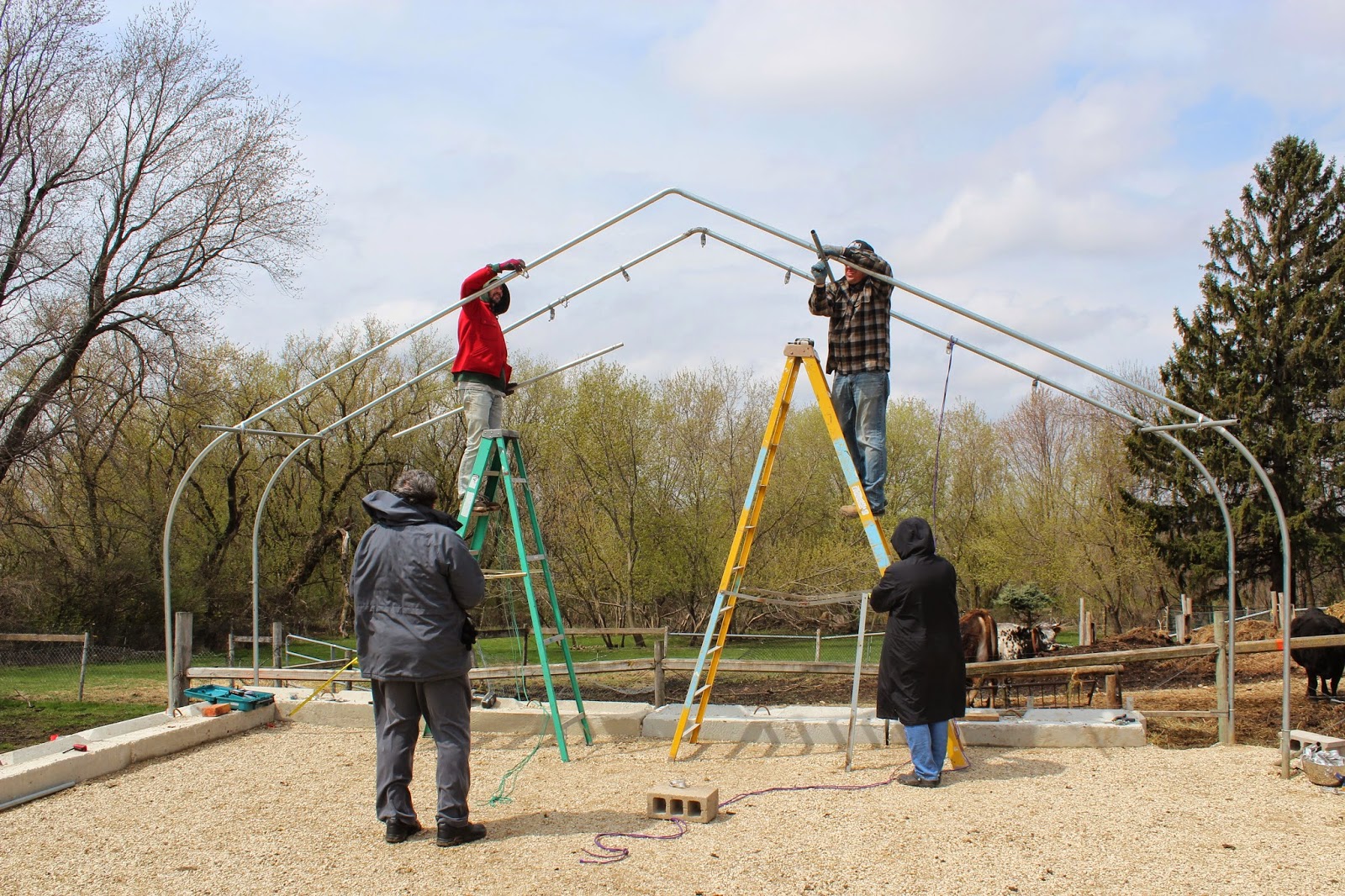 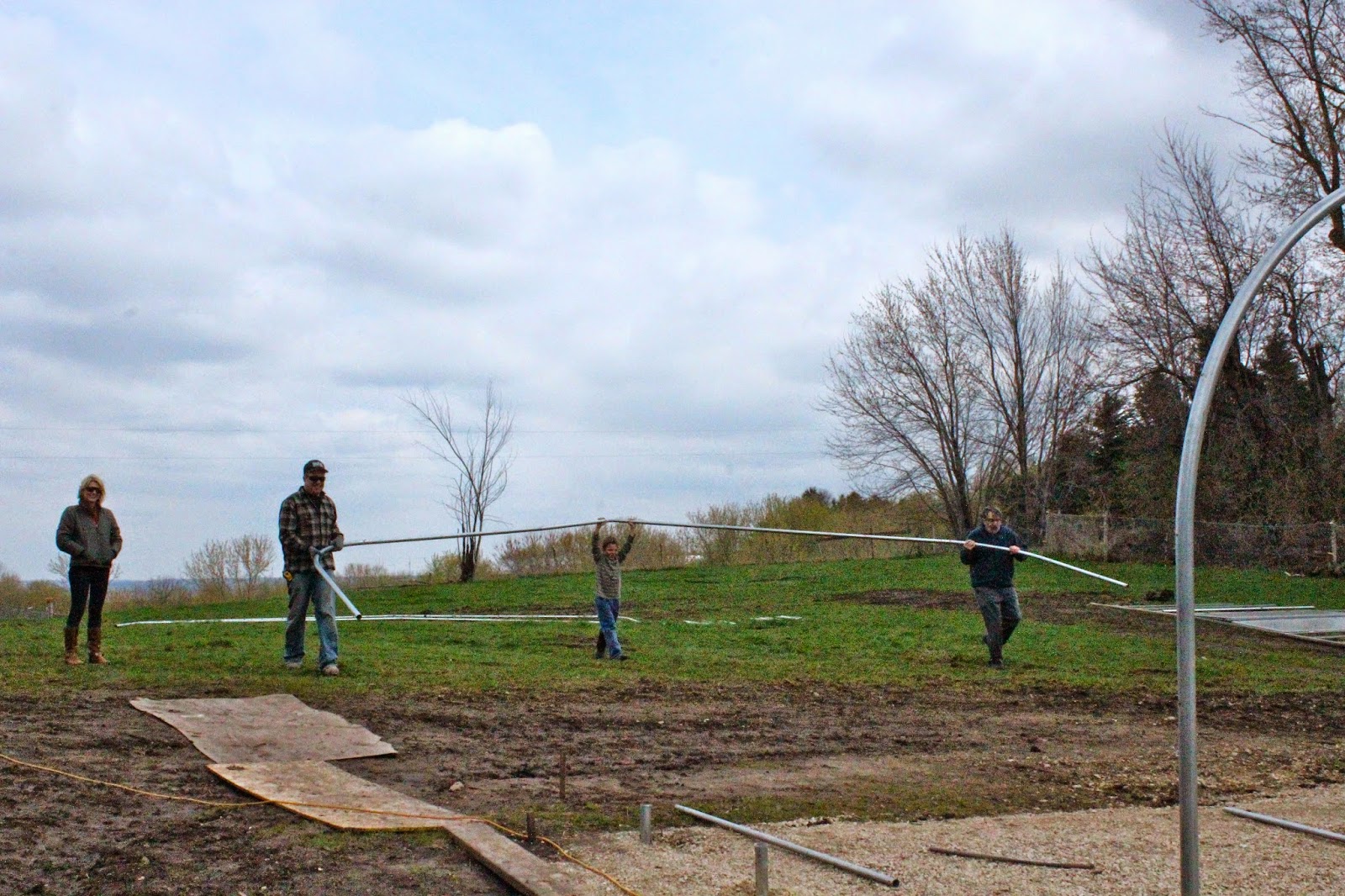 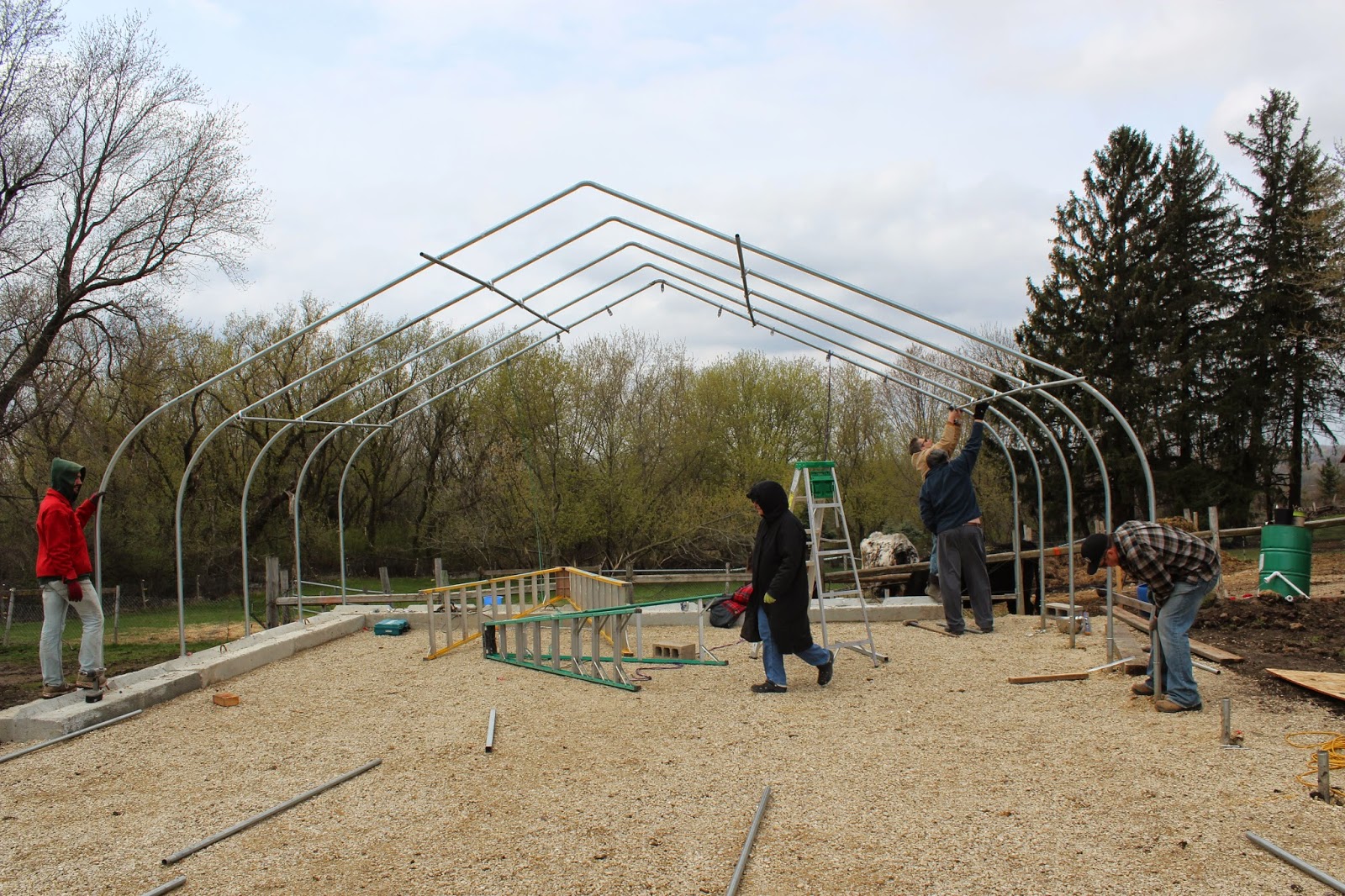 Half of the arches up. 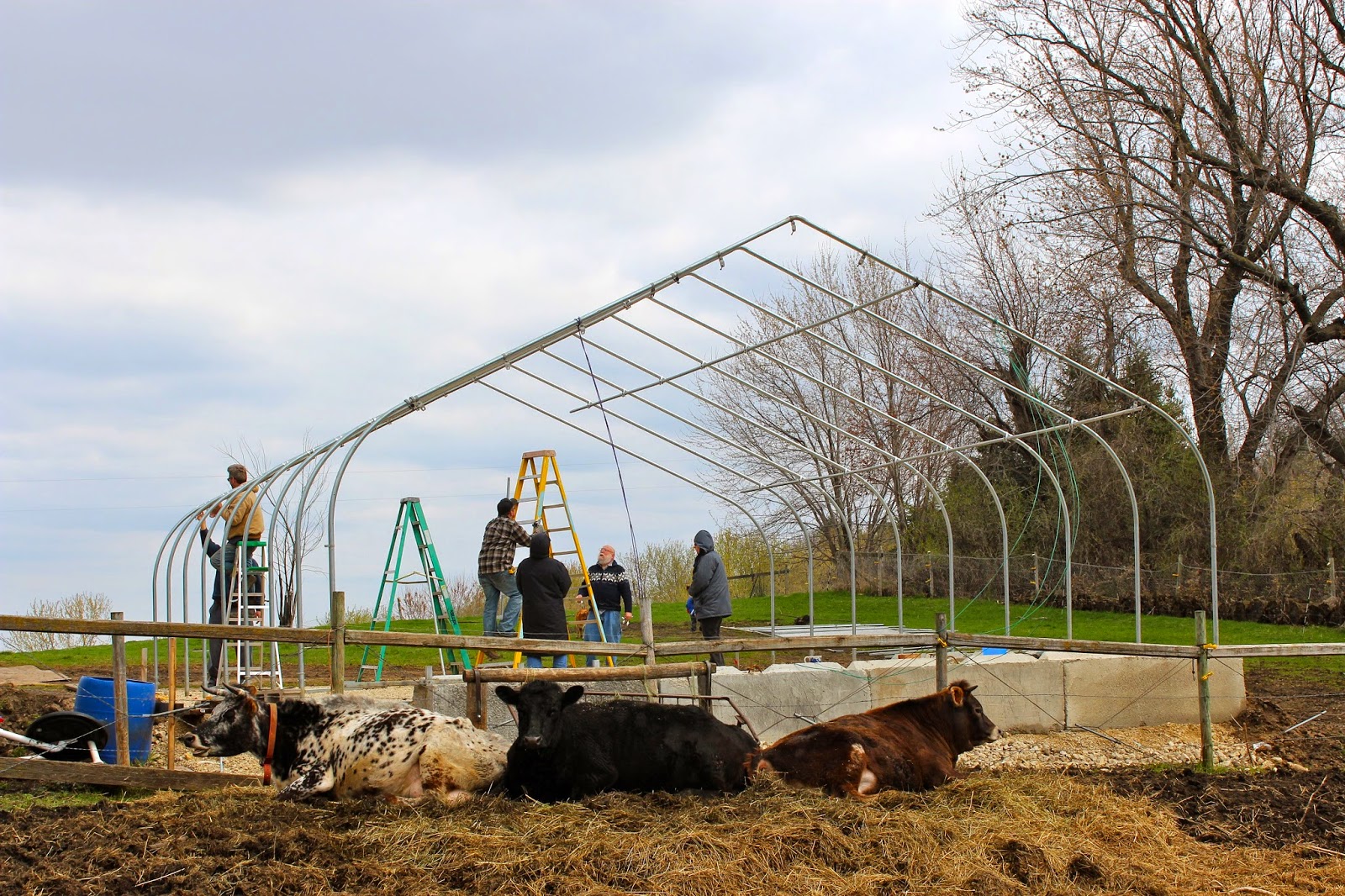 The cows critiquing our work.
We got the structure up Saturday, but it took most of Sunday to tweak the frame--adjusting joints to make sure everything as precise as possible for installation of the panels. 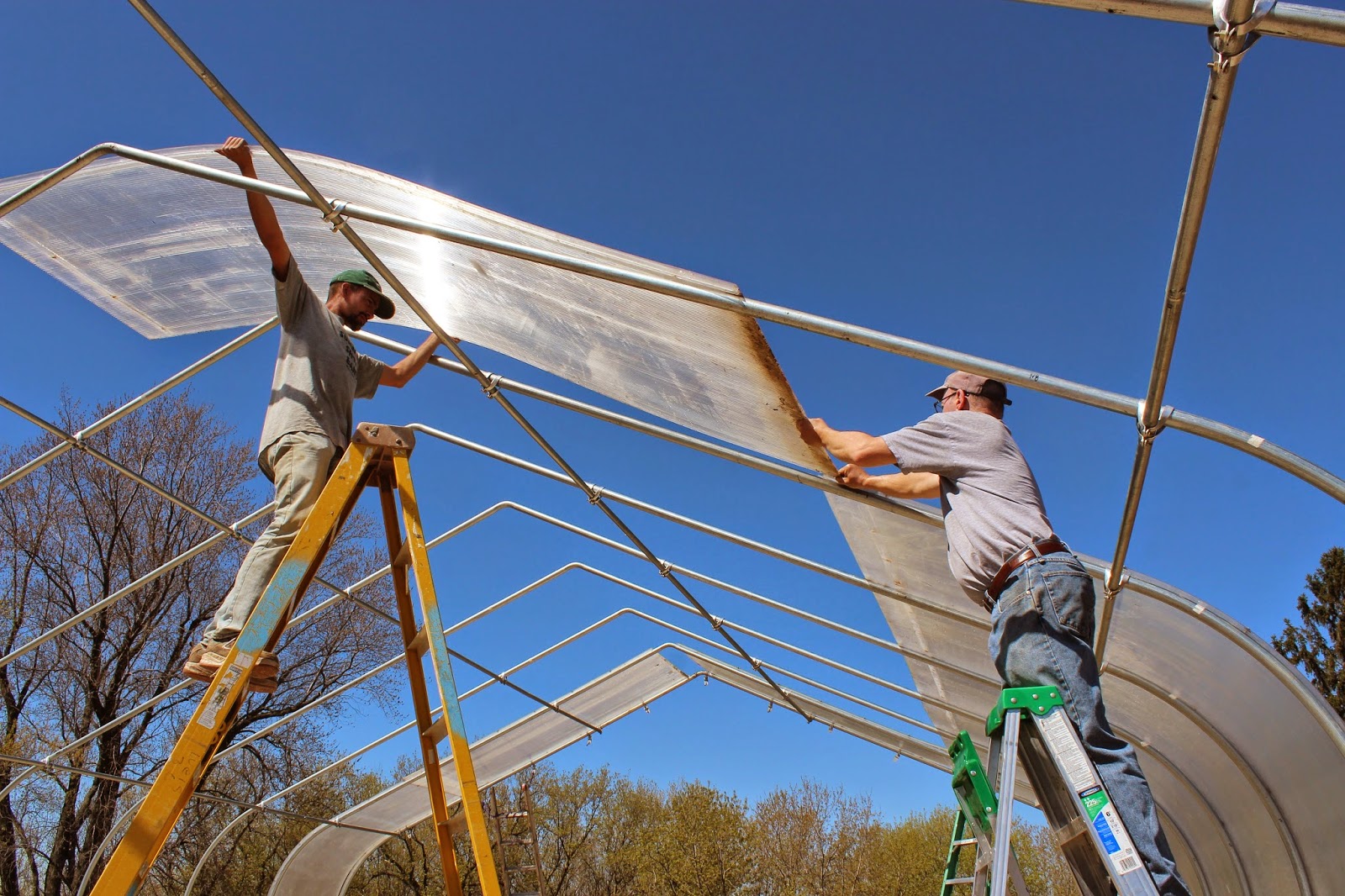 On Monday, Colin returned with his dad, Dave, and we got half of the bottom panels installed. It is not nearly as easy as it looks. The panels are connected along the sides with a plastic channel. We found it nearly impossible to slide the panels together into the  connectors around the curve of the roof but we discovered we could thread the second panel into the connector at the top, and with the help of a spritz of WD-40, slide it down into place. 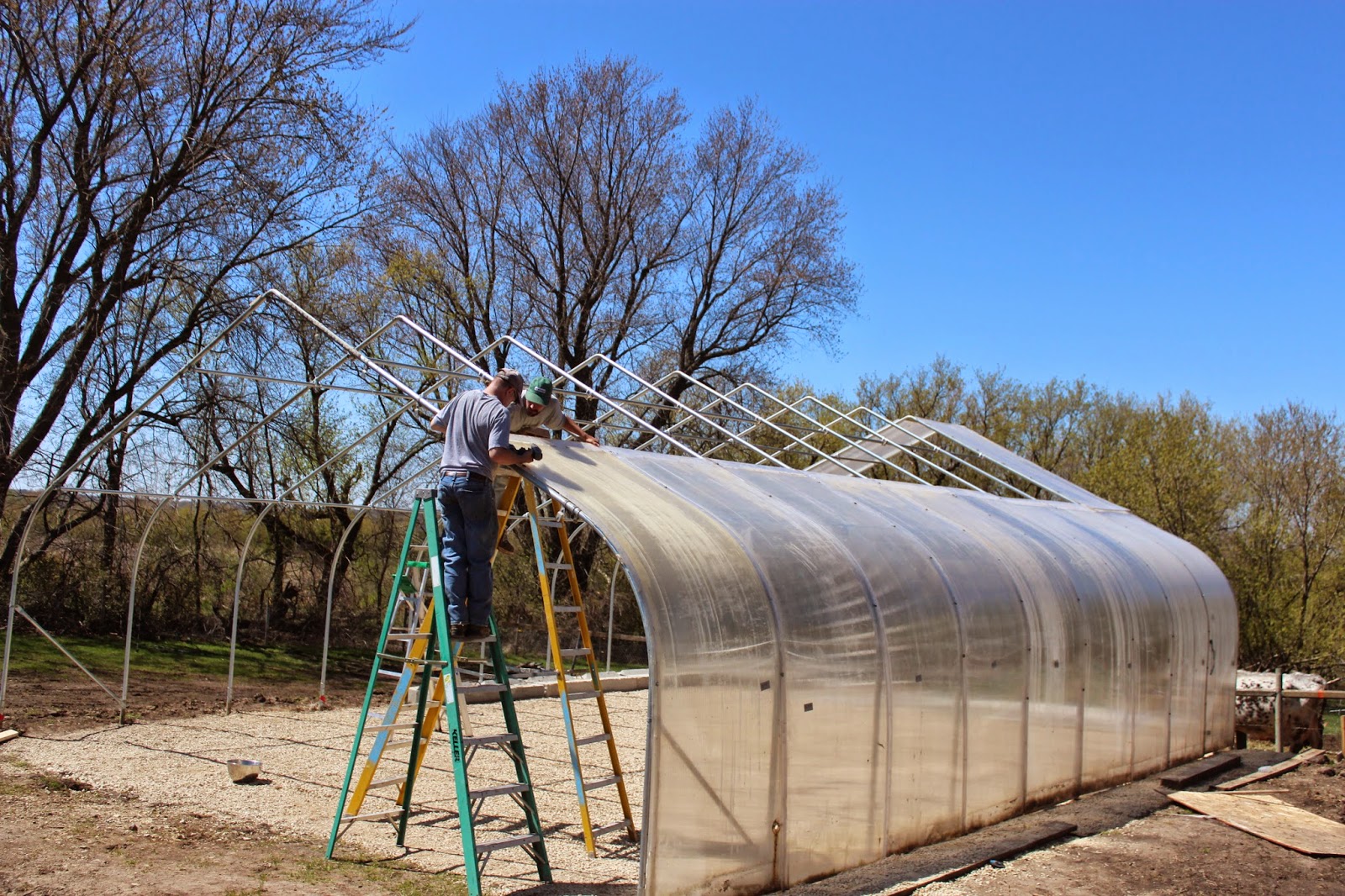 Half of the lower panels completed Monday by Dave and Colin! 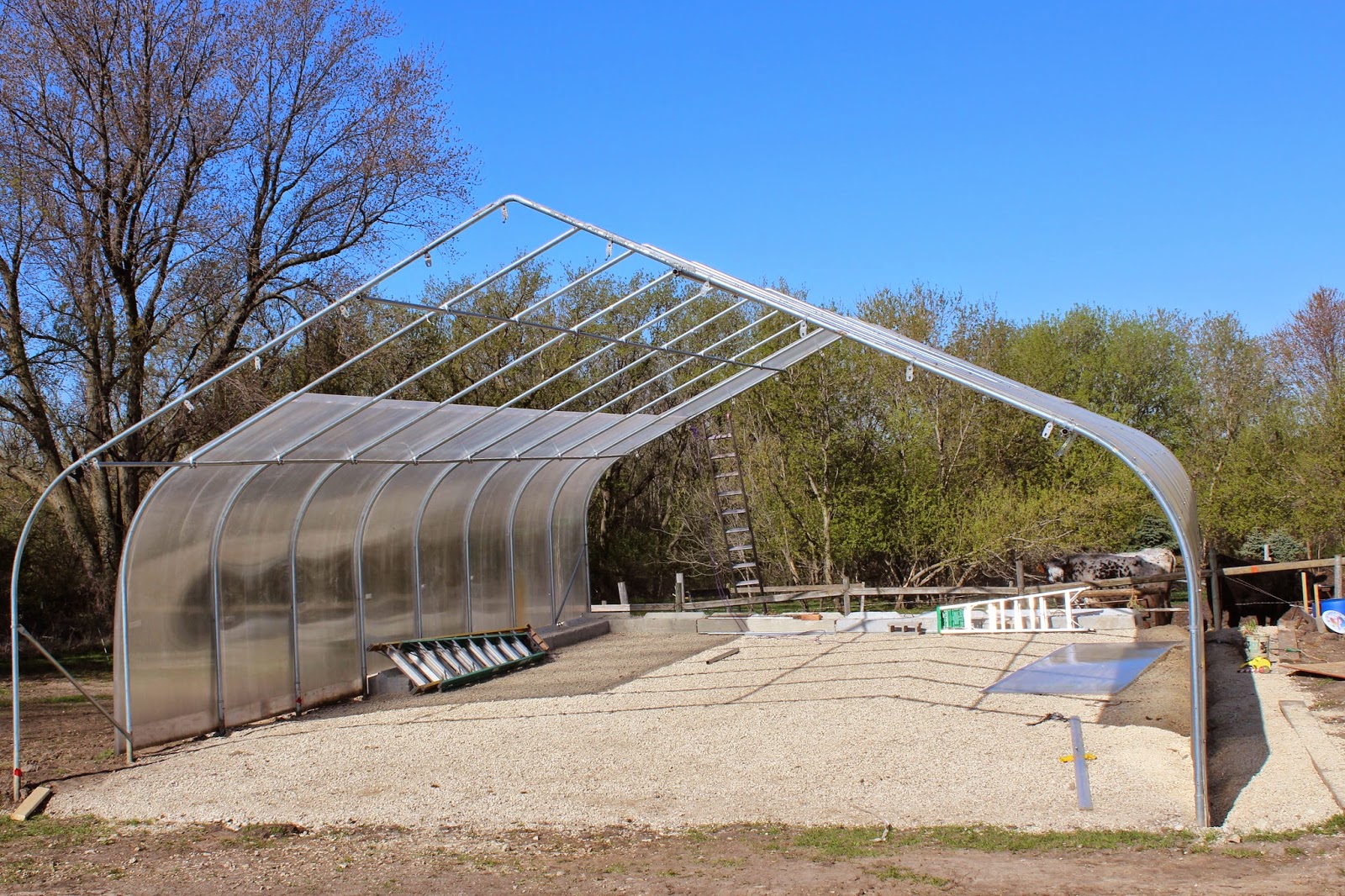 Yesterday morning, they returned and got nearly all of the south side bottom panels up. It is getting there!
however, Colin is now returning to Malawi and we must focus intensely on completing the commercial kitchen in the next few weeks, so the greenhouse may have to stay half-finished for a while.

Huge thanks to our generous, hardworking friends. We owe you. Maybe a little feasting and festing  in the greenhouse one of these days...