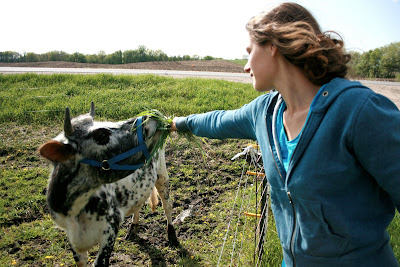 Yesterday afternoon Cadence  and I went on a road trip to check out a  couple of Craigslist ads : one for a small commercial convection oven and one for a family milk cow.  We didn't fall in love with the oven, but we did fall in love with the sweet cow.  She is a small Jersey-Shorthorn cross and extremely  friendly.  She'll stand still to be milked in the field without even being tied up. She is giving about 4 gallons a day, more than enough for us! 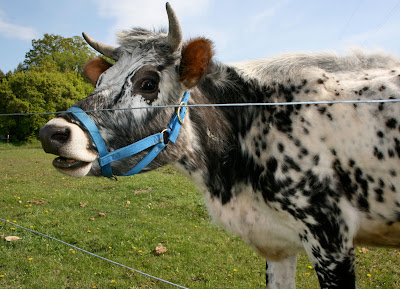 She  knows her name - Lafonda - and  comes when called.  Her owners have a livestock trailer and will deliver her to us on Sunday --I'll let you know how our our first milking adventure goes.
Posted by Susan at 1:58 PM 4 comments: 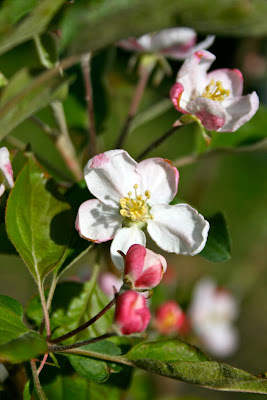 After all the ugly garbage photos in the previous  post, I  decided I better post a few photos showing how beautiful it really is at Squash Blossom Farm this spring.  This April is almost a month ahead of last year; no wonder we feel so far behind.

Cadence dug up the two huge bridal veil bushes on either side of her granary entrance and moved them  next to the loafing shed. In their place she planted semi-dwarf apple trees, a Haralson and a Zestar, which have now burst into bloom. 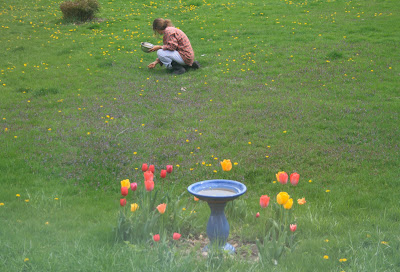 Our yard is full of dandelions, violets and creeping charlie.  The previous owners had a weed-free yard and would probably be appalled.  We won't use chemicals, though, and are trying to look for the positives, which are many.  The creeping charlie has turned out to be a wonderful early food source for my honeybees and for bumble bees.  The goldfinches love the dandelion seed heads. I gathered up violets to make jelly and here, Cadence is gathering dandelion flowers to make wine (stay tuned for more details on these projects later.) 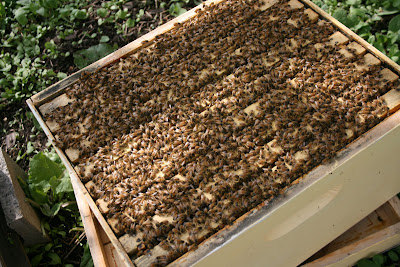 Speaking of honeybees, my bees survived the winter and are thriving! Spring came so fast I did not have a chance to administer the preventative medicine for nosema (bee diarrhea).  I have inserted the apistan strips to control bee mites and  spread the  terramycin powder to prevent foulbrood. The bees had built brood cells between the layers of frames and I had to destroy some of those larval cells to get the frames apart.  I got stung twice (my first beekeeping stings)  but I can't blame the bees for  being upset about the destruction of their offspring. 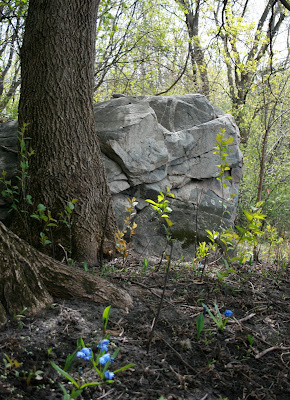 Last fall I planted several hundred bulbs, including some scilla scattered around the big rock, which have been blooming over the past few weeks. I can't tell yet if the  swaths of wildflowers i planted in the woods have germinated or if those were seeds that were already there. 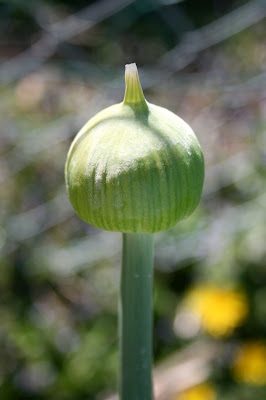 The tall purple allium  have budded. 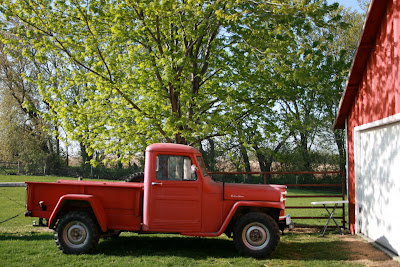 We got the Willys truck  back from an expensive brake repair, only to have the other front brake break.  I go to drive it home after  the second repair--it is a truck that just demands singing truck songs at the  top of your lungs while you drive. Very fun.
Posted by Susan at 7:52 PM No comments: 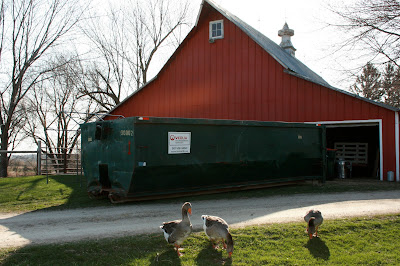 April has been spring cleaning month.  We needed to  get rid of the accumulated  junk in the north end of the barn where we want to build the brick oven.  I didn't  have a clue what size roll-off container to order for the debris, but it turns out  all the sizes cost the same to rent, plus the cost of disposal for whatever you  put in it. So naturally I ordered the largest size, for good measure. Whew, it was BIG! 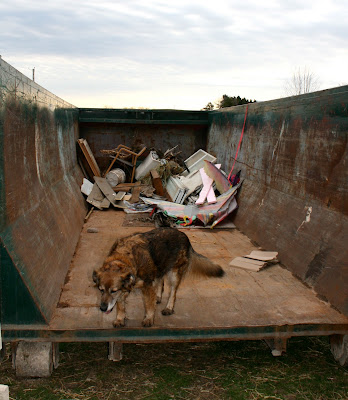 We doubted we would be able to  fill even half of the dumpster.


But we had  use of it for up to 10 days, so after we  cleaned out the north side of the barn we were inspired to also clean out out the large middle section of the barn, which was deep in old hay and  building material scraps and garbage (a little bonus that came with the farm.) We purchased high quality respirators for that dusty job.  It took us a long weekend, but even then the dumpster still had plenty of  space left. 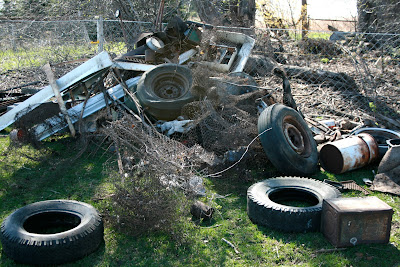 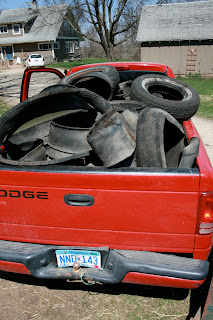 So, we decided to also tackle the woods along the pasture.  Typical of old farmsteads,  this one has several dump sites. The  worst area was on the south side of the pasture fence, where we pulled out old appliances, paint cans,  cookware, curtain rods, gutters, fencing, machine parts, car seats, and tires galore.


Some of the tires had been sliced apart, but we  collected 30 intact tires and approximately 30 more cut-up tires, which totally filled our pickup and our trailer.  In our county, there is a tire recycling charge of $3 per small tire and $5 per large tire.  The recycling facility manager was kind, charging me $3 per  whole tire, but only $20 for all the rest of the of cut-up tires. (Happily, we did not  find any big tractor tires---they cost $30 each to recycle.) 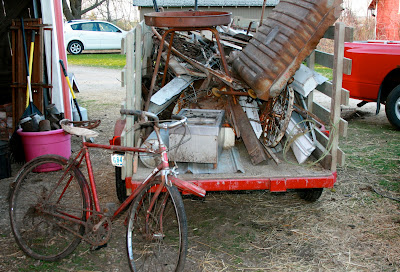 We sorted out all the metal and hauled it to the scrap yard.   The scrap yard was a surreal experience: we drove into a chasm between steep walls of scrap metal where a crane lowered a huge magnet  over our little trailer. All the metal leaped from the trailer to the magnet --and it felt like the truck and trailer levitated for a moment.  We earned $37 for the metal, a little bit of profit to offset the tire recycling cost.


We also sorted out several large  boxes of rusty  cans of unidentifiable paints and chemicals (still full of liquid!) and  took them to the Household Hazardous Waste facility.  We were especially relieved to get those out of the woods before they rusted through and leaked the contents into the soil.
Amazingly, in addition to the  tire load, the HHW load, and the scrap metal load, we filled the 30-yard dumpster to the brim!  We haven't gotten the bill for it yet; I am a little bit afraid to find out what that will cost.
That is how we celebrated Earth Day this year.  We are pleased to have made our little corner of the world a cleaner, healthier place.

Email ThisBlogThis!Share to TwitterShare to FacebookShare to Pinterest
Labels: Life on the Farm, Spring 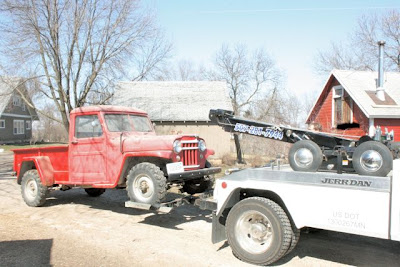 In the past month I have spent 11days in Guatemala,  followed by a week out of commission with a nasty respiratory infection, and the  past two weeks frantically trying to catch up on everything.  Plus, my camera  had to be sent in for repairs when I got home and I have been struggling through computer issues.  Thus, this poor blog has been sadly neglected.

I will try to get back on track with regular posting but to catch you up a bit, here are a few happenings from the past month:

a) We had the Willys truck towed in to have the brakes repaired by professionals.  Rog drove it home and I drove it around the neighborhood, but it is not ready for hauling stuff to the Farmers Market yet... 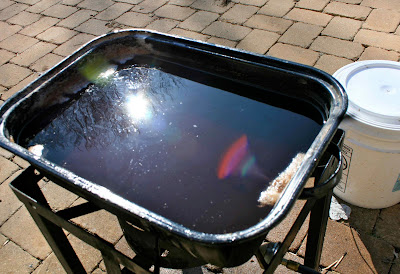 While I was in Guatemala, the maple sap ran.  Rog and Sara  collected sap form our two big silver maples and boiled it down but we only got enough sap (about 30 gallons) to make one gallon of syrup before the nights warmed up above 40 degrees and the sap stopped running.  Last year we made 3 gallons of syrup and that was barely enough --this is going to be one precious gallon of syrup! 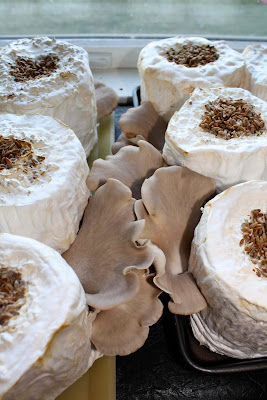 The oyster mushrooms have been growing like crazy  Grain, infused with mushroom spawn, had been put into the center tubes of unbleached toilet paper rolls which had been immersed soaked  in boiling water.  They were kept in a cool dark room for 5 weeks. The the rolls were refrigerated for  a week, and finally placed in the light --where they began fruiting.   We have been enjoying the tasty mushrooms ever since on pizza, in salads, stir-fried, grilled in sauces...


The first mushroom harvest is now finished, but we expect to get a couple more "crops" before the toilet paper rolls are depleted. We will also try growing oyster and shitake mushrooms on  oak logs. 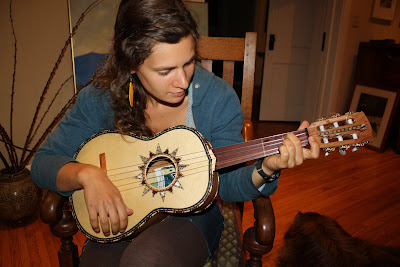 We have lost one daughter (Sara left for a film-making internship in North Carolina) and gained one daughter --Cadence returned from her adventure in Mexico a few weeks early.  Cadence travels light--she came home with just the clothes on her back and a lovely lute-like instrument called a "vihuela."  Her vihuela is larger than a mandolin but smaller than a guitar,  has a curved back and 5 strings. She has  learned to get some very sweet Latin sounds out of it. 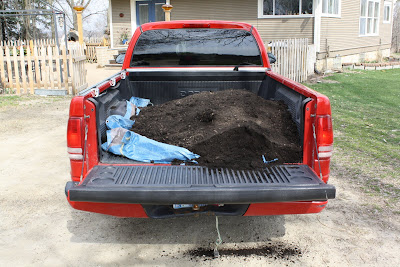 When I left for Guatemala on March 11th, we had a foot and a half of snow on the ground. When I got home 11 days later, it was spring-- bare ground, greening up and balmy!   Now spring is in full force and we are frantically trying to keep pace. We have 8 flats of assorted peppers, tomatoes, onions, and other miscellaneous  veggies started, but we still have a lot of seeds to start.  With temps in the 70's it feels so late. We have to keep reassuring ourselves that we are not so far behind--it's only mid-April --it could still snow.

We have hauled a couple loads of compost from the  County compost site to the garden, We planted 50 bare-root June-bearing strawberries (wondering whether that will mean an abundance or not nearly enough berries.).  We mulched the  raspberries, which are leafing out nicely. Today Cadence planted peas and built a trellis for them. The garlic is about 6 inches tall and we will be able to harvest our first rhubarb this week!  You can see obvious growth from one day to the next --this is such an exciting time of year!
Posted by Susan at 8:30 PM 7 comments: