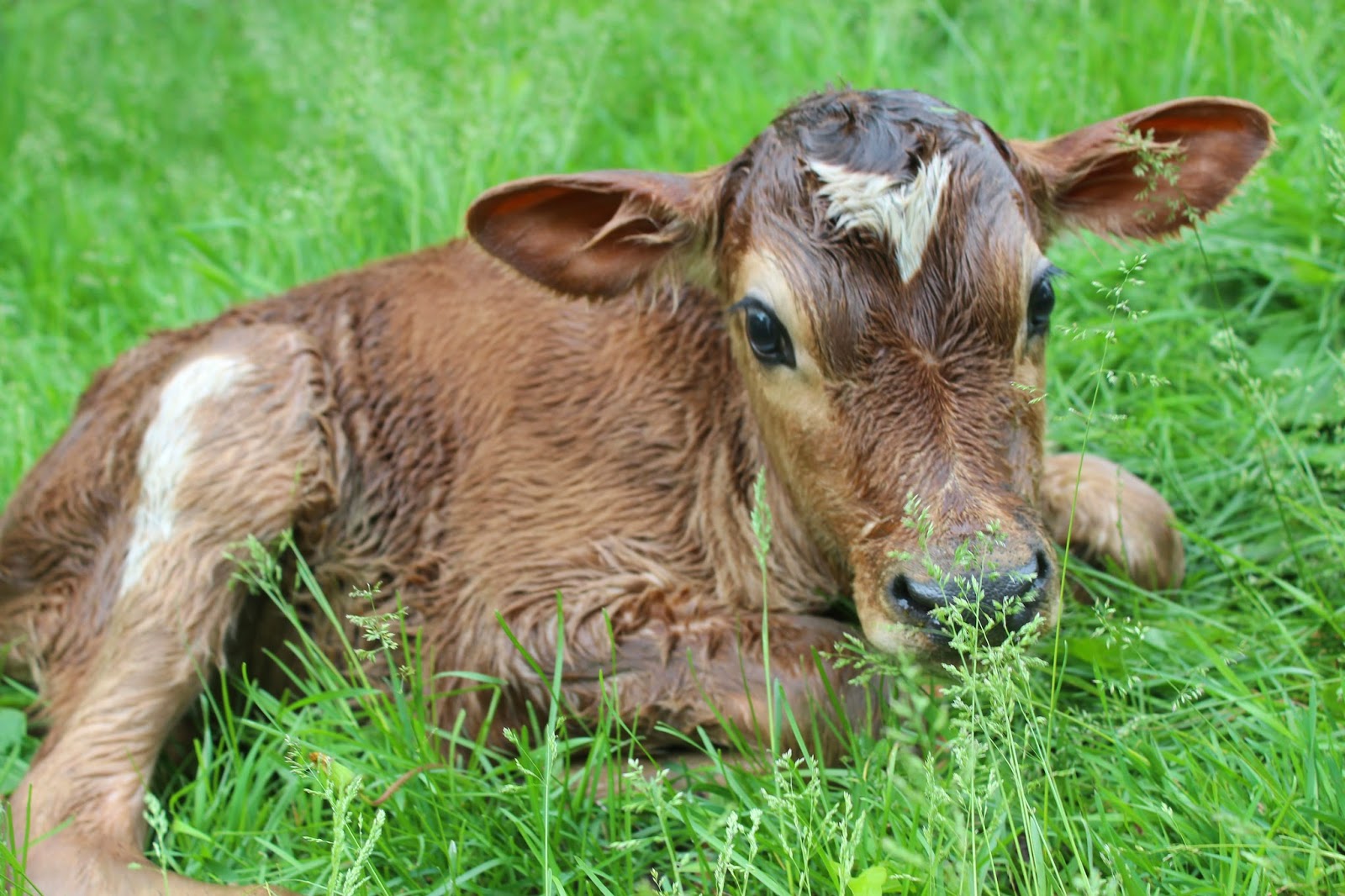 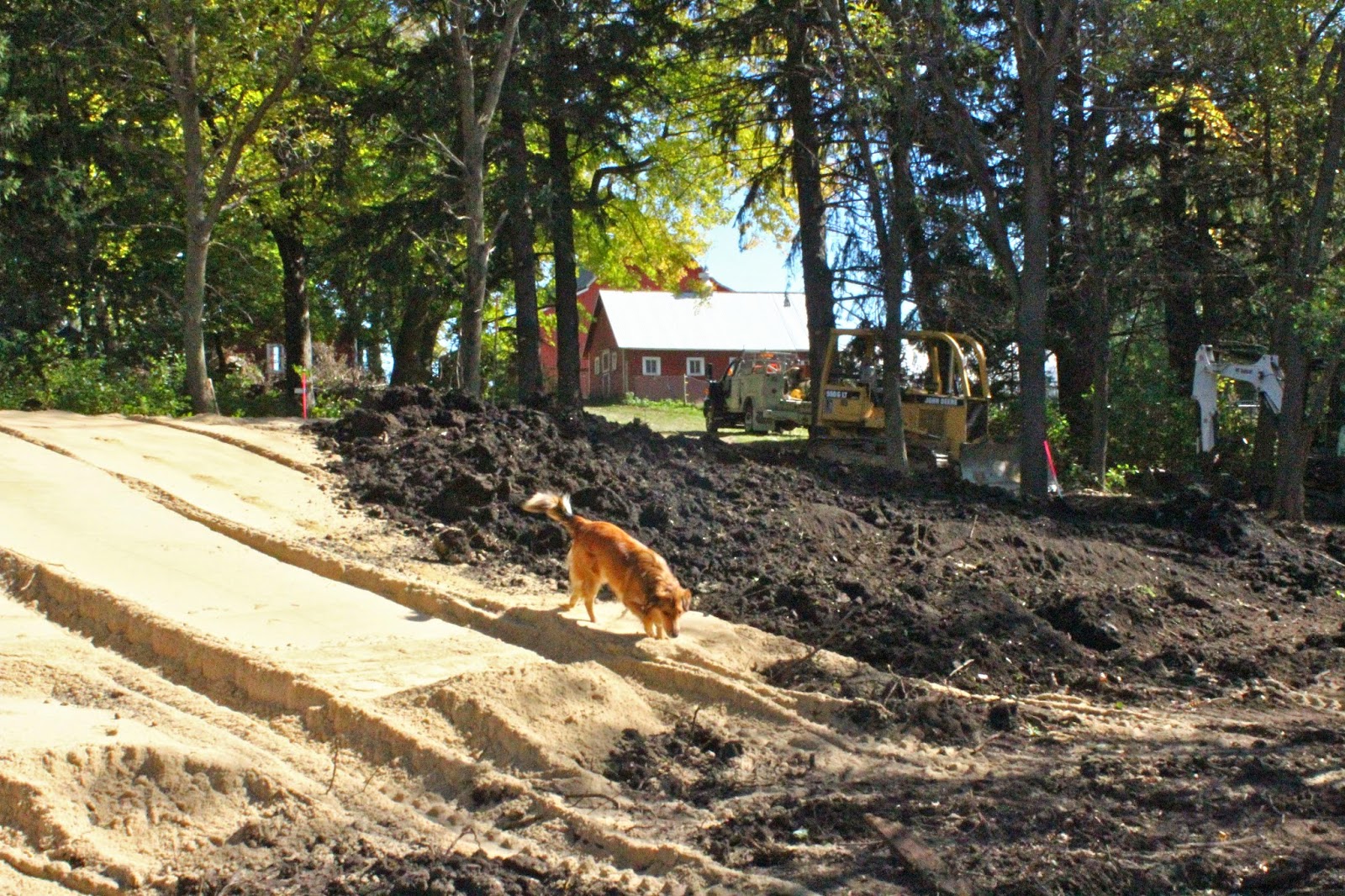 When I last posted on this blog  about building the commercial kitchen, it was November and we were building the mound for the new septic system. We had decided to have the mound constructed on the far side of the west windbreak so that we wouldn’t have to see it so obviously and so it wouldn’t interfere with the pasture, garden or future car parking.  Many trees came down, as well as the old pig shed, and the hill turned out to be much bigger than I expected, but I am getting used to the terrain change and once it is covered with grass and meadow flowers, I imagine it could even become an attractive feature.

After the mound itself was finished, there was much more digging toward the barn. 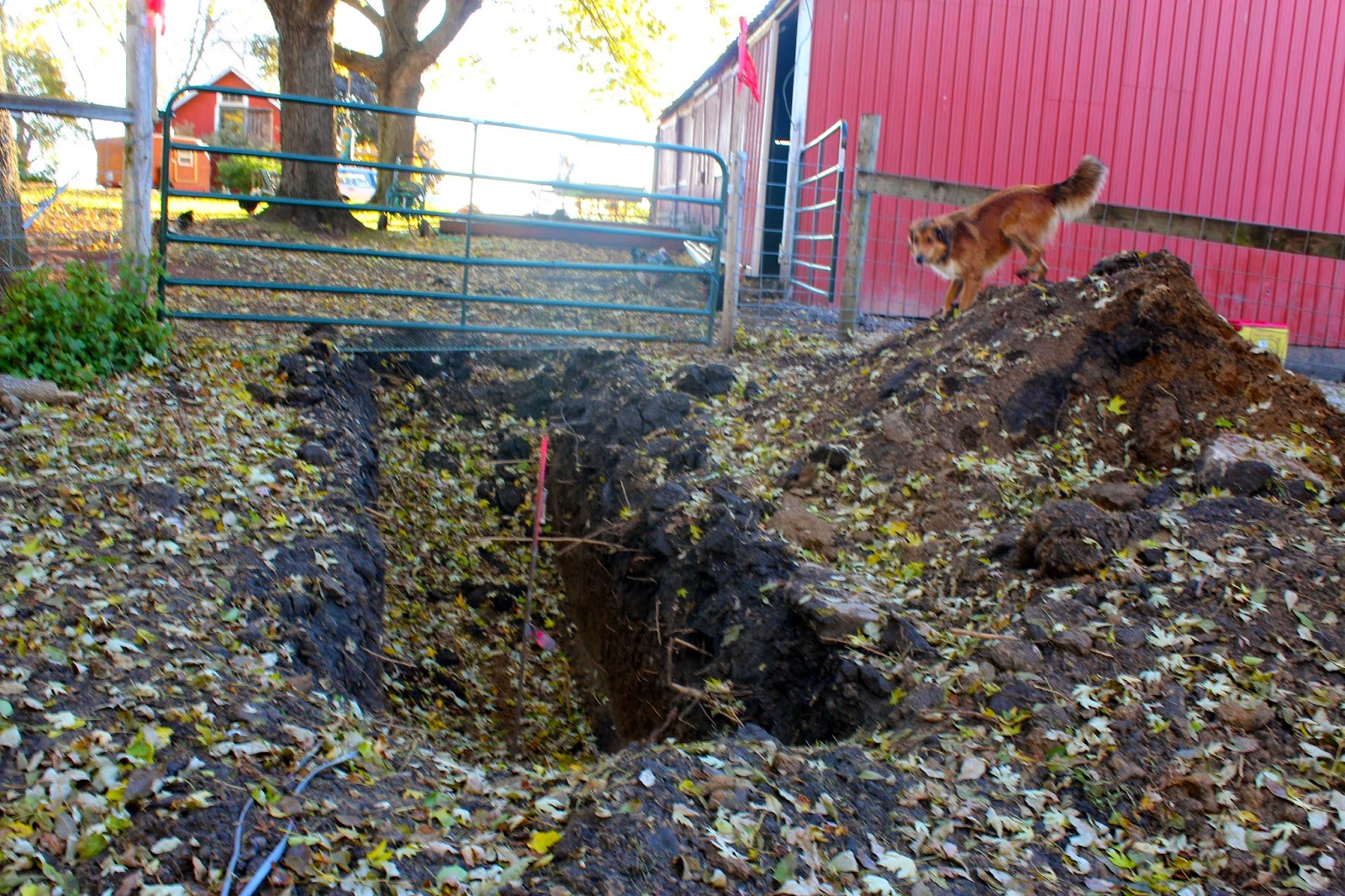 Then even more digging toward the barn. And then trenching inside the entire length of the north end of the barn (which required moving all the stuff stored in there, including a huge woodpile, and of which I do not have any photos.) Our soil is mostly heavy clay. This part of the project was completed just as serious winter hit, so fortunately the mud quickly froze hard. But it is going to be very mucky come spring. 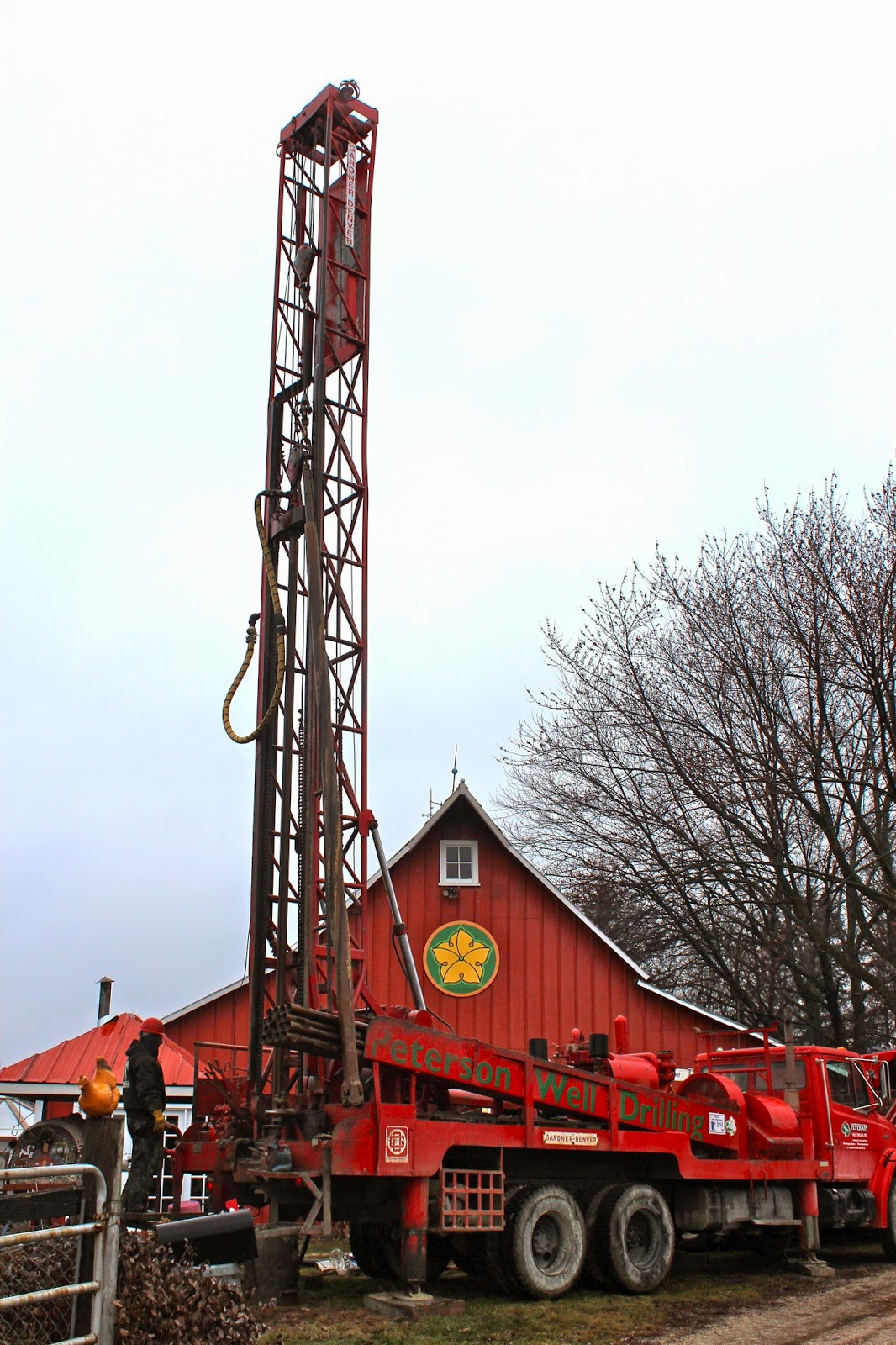 In December, we had a week-long thaw so the  well-drillers were able to begin work right before Christmas. They ended up drilling the new well in front of the barn. 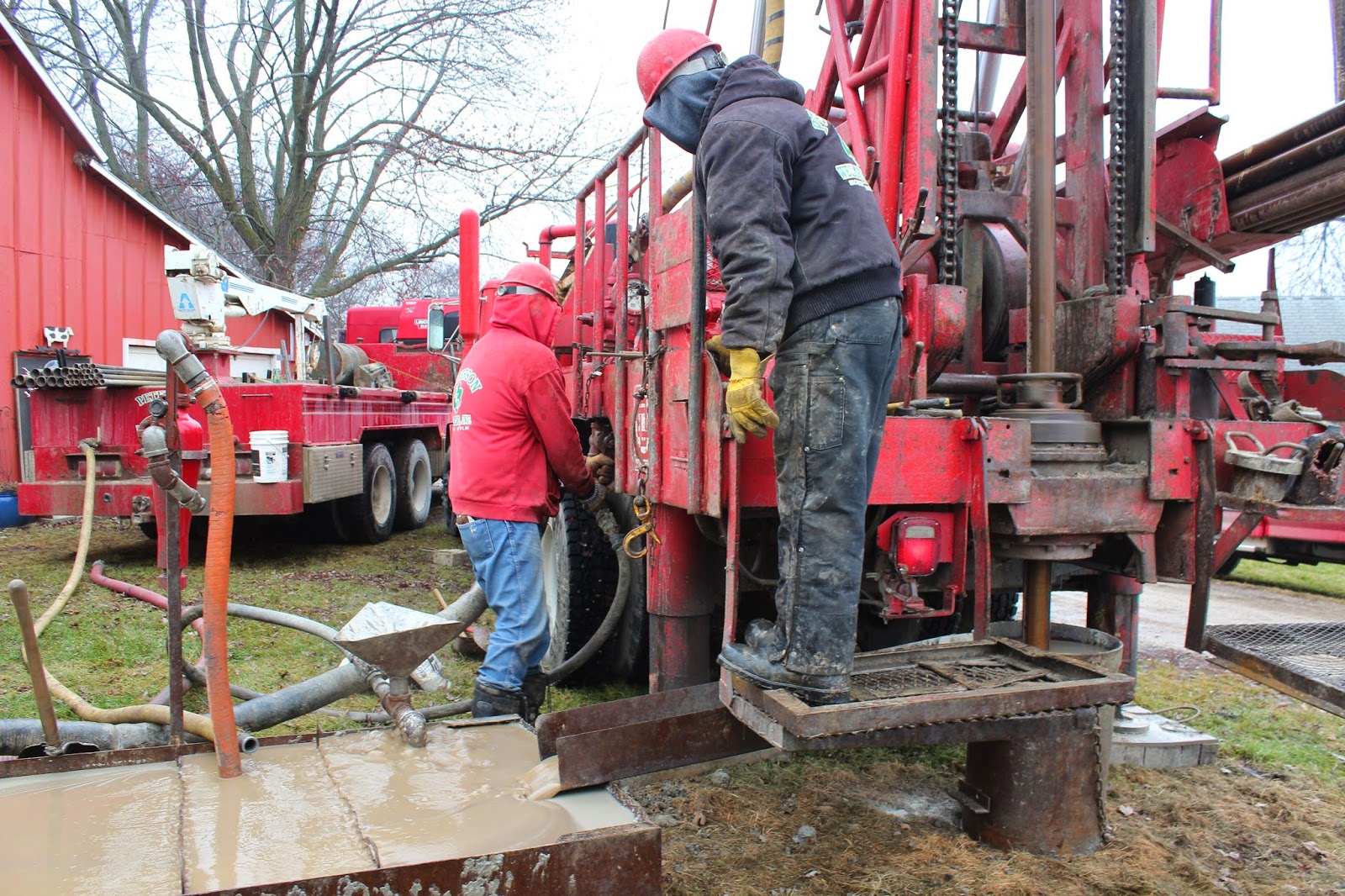 I did not know that when a well is drilled, a LOT of mud is pumped out. 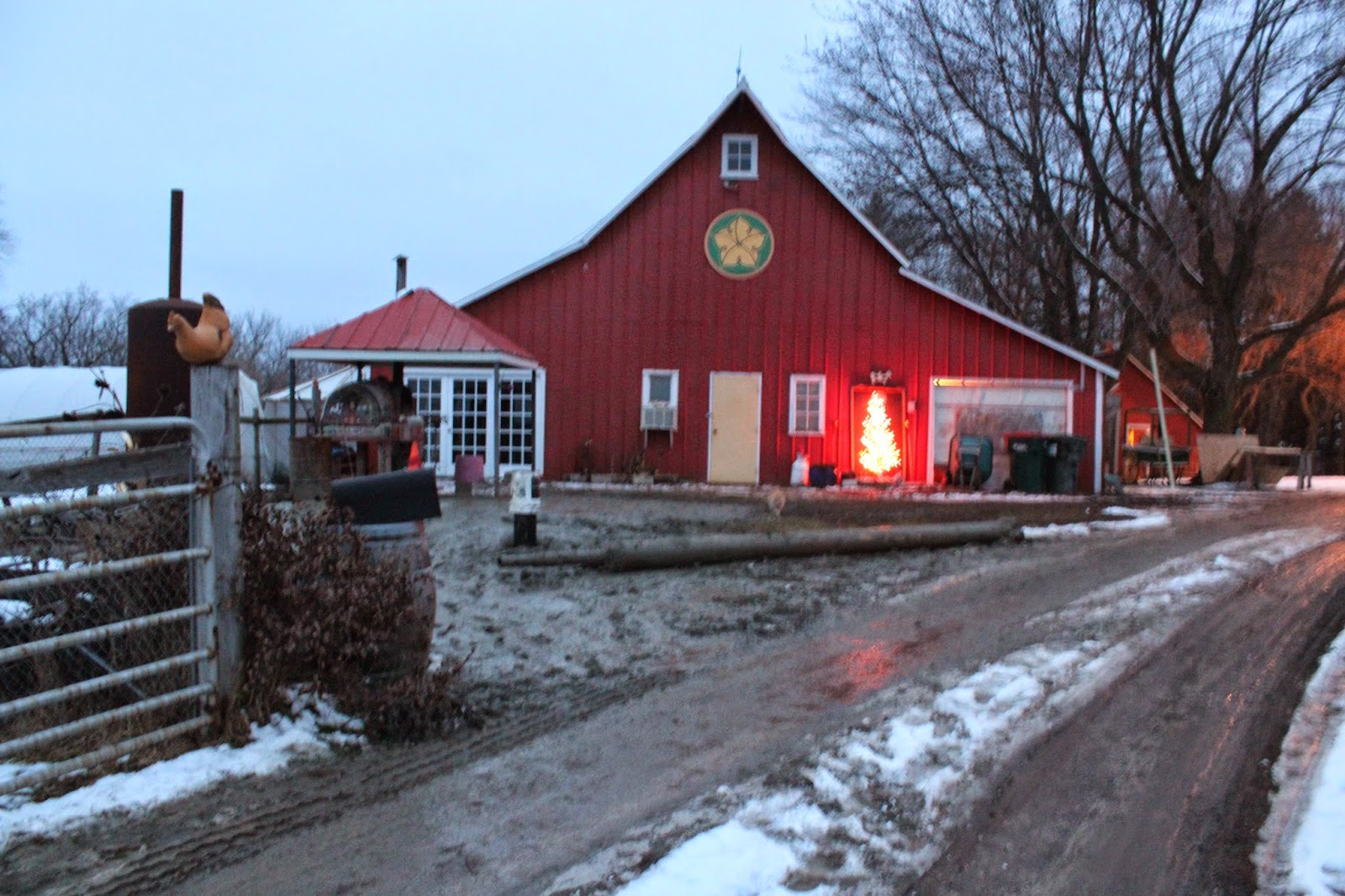 The weather turned very cold, so they pulled out their equipment for a few weeks, leaving a huge sea of clay mud that covered the yard in front of the barn and oozed out into the pasture. I cannot describe how dismaying this was. I was so relieved to get a big snowfall that covered it up so we didn't have to think about it so much. 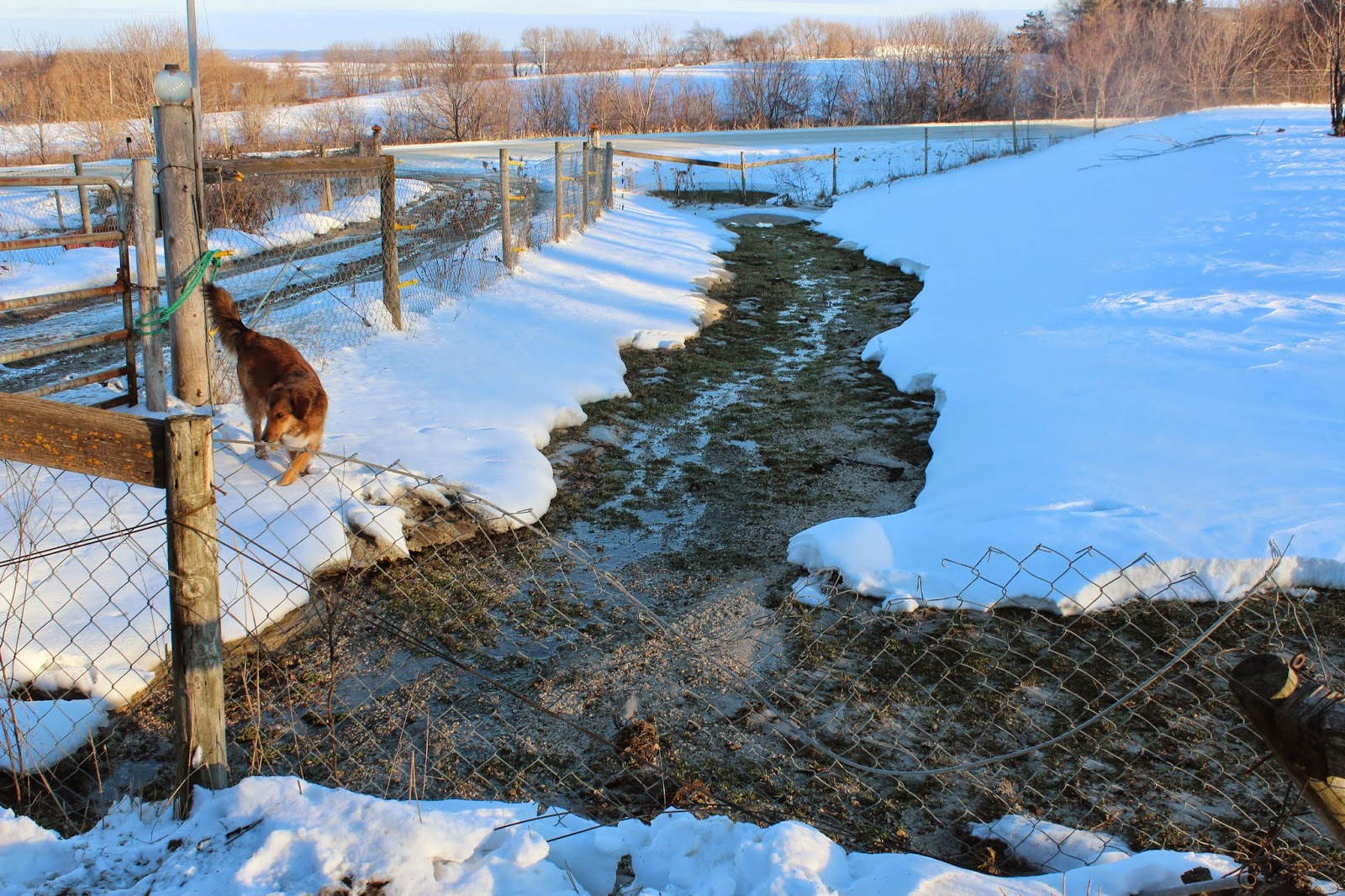 When it warmed during a January thaw, the well-drillers returned and continued work. Water from the first aquifer had tested high for nitrates so they had to drill down into the Jordan aquifer,  580 feet. When I came home the evening they reached the Jordan, torrents of water were gushing through the garden on the north side of the driveway and through the pasture on the south side, rushing downhill to fill the ditches. It left gullies that will have to be repaired this spring, but on the bright side, it also washed most of the dismaying sea of mud away.  Between the septic  installation and the well installation, I estimate we will have about half an acre of mud to restore to grassy yard next spring. 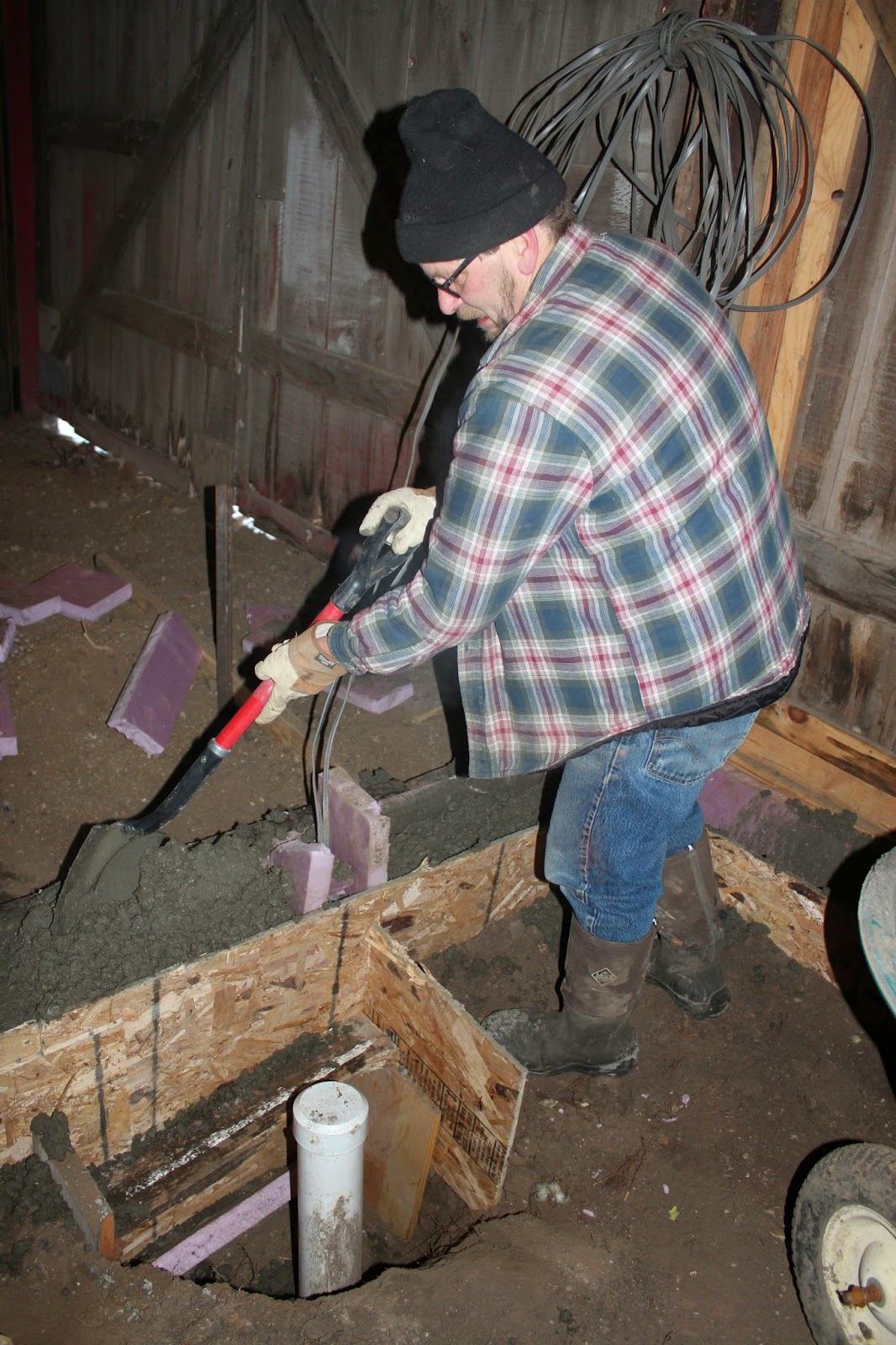 While all of this work was going on outside, Rog was working inside the barn. He dug through the hard, rocky ground to pour footings for the new walls that will enclose the baking area, bathroom and storage room. 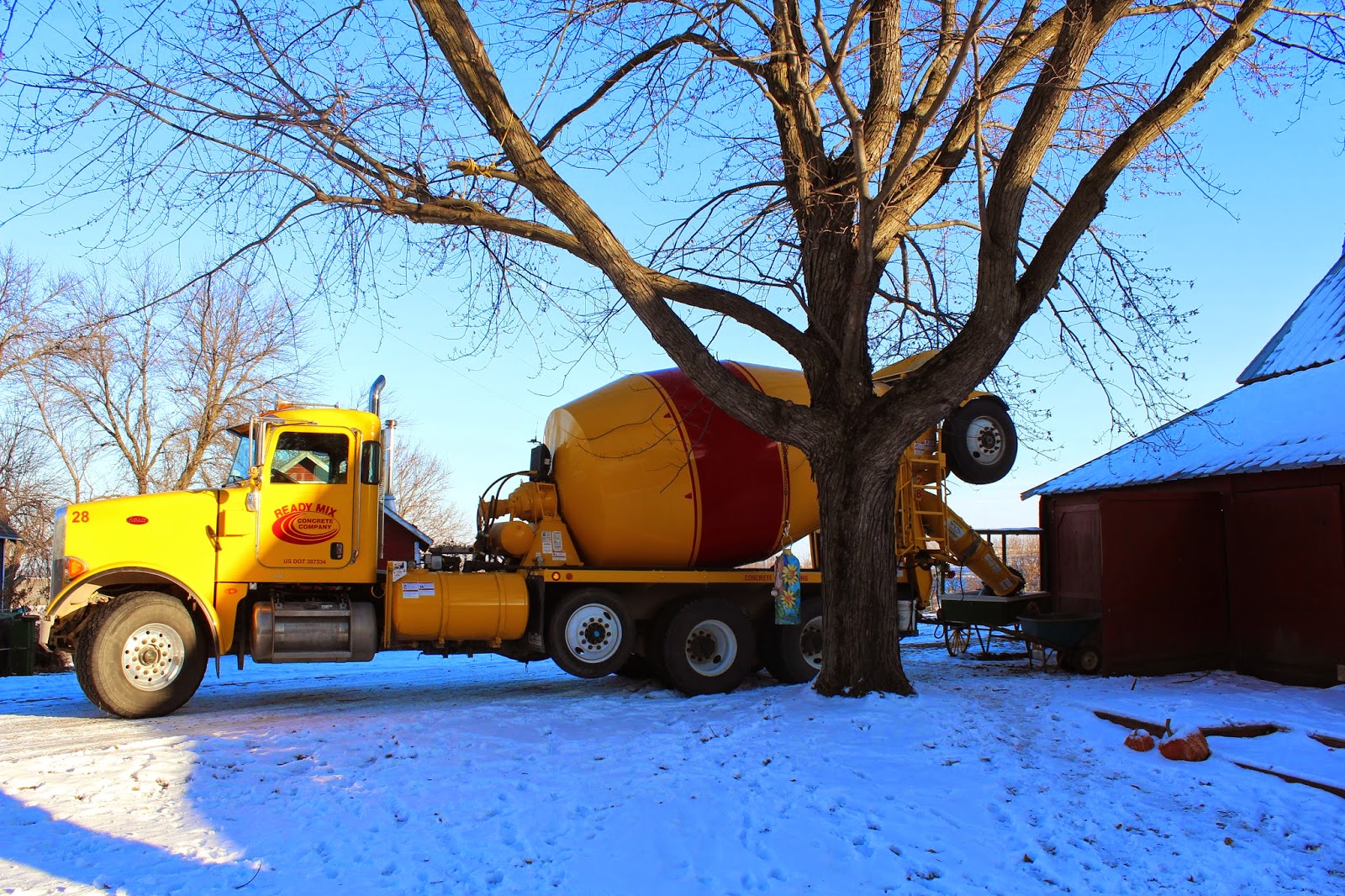 Cement mixers arrived to pour concrete for the footings. 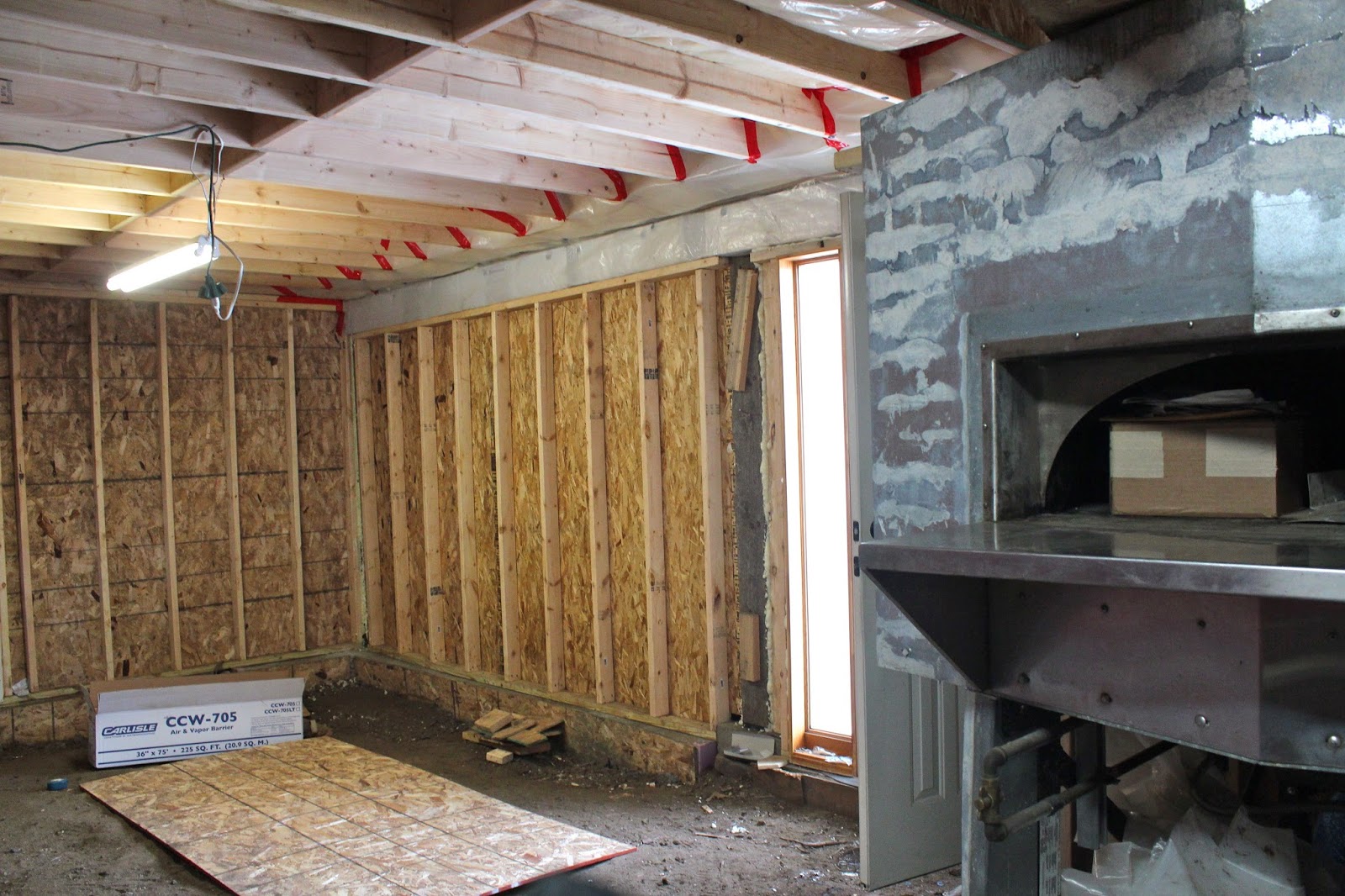 Our friend Mike McMullen helped Rog build the walls and ceiling inside the north end of the barn. 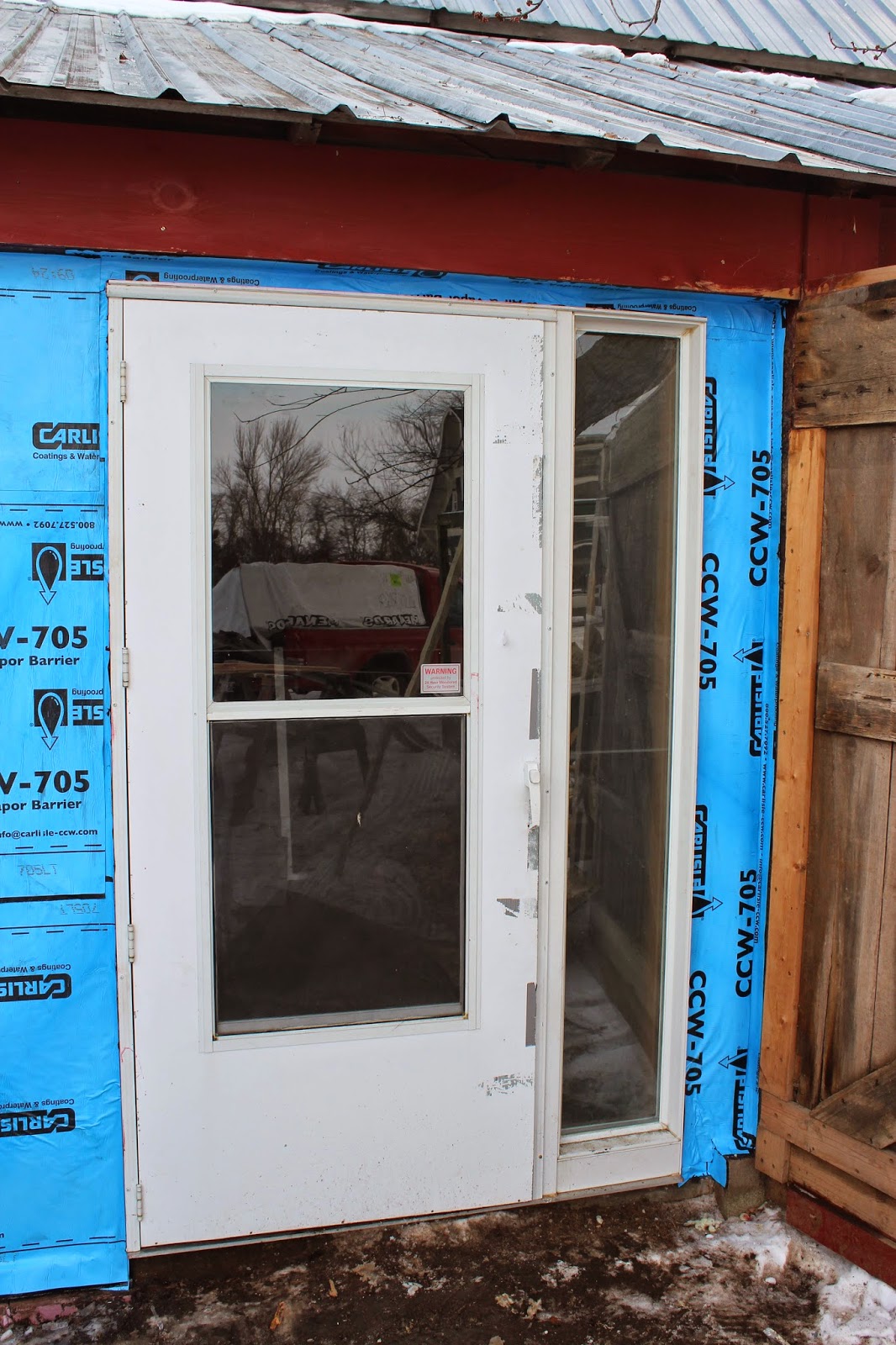 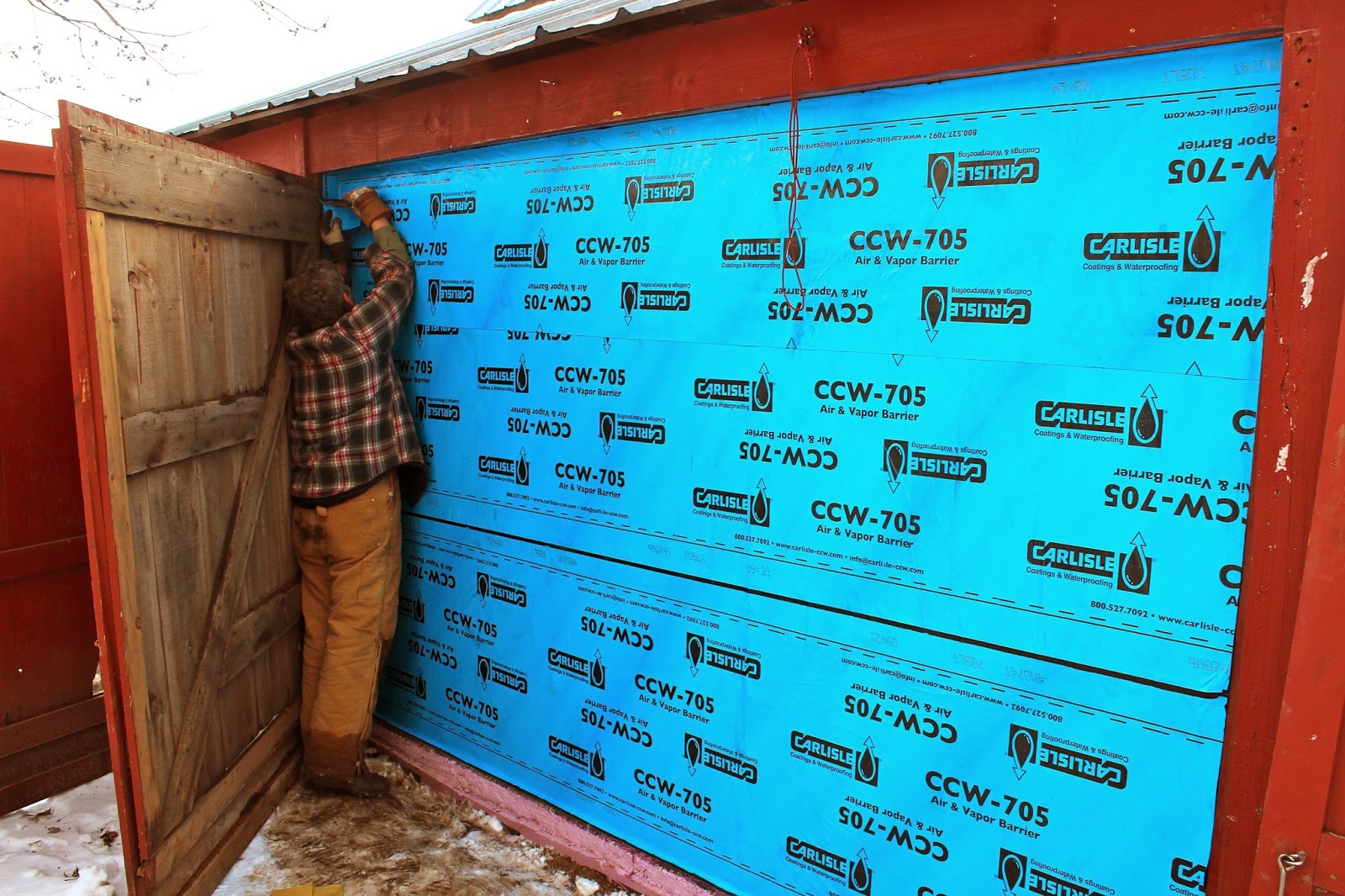 and insulation and vapor barrier. 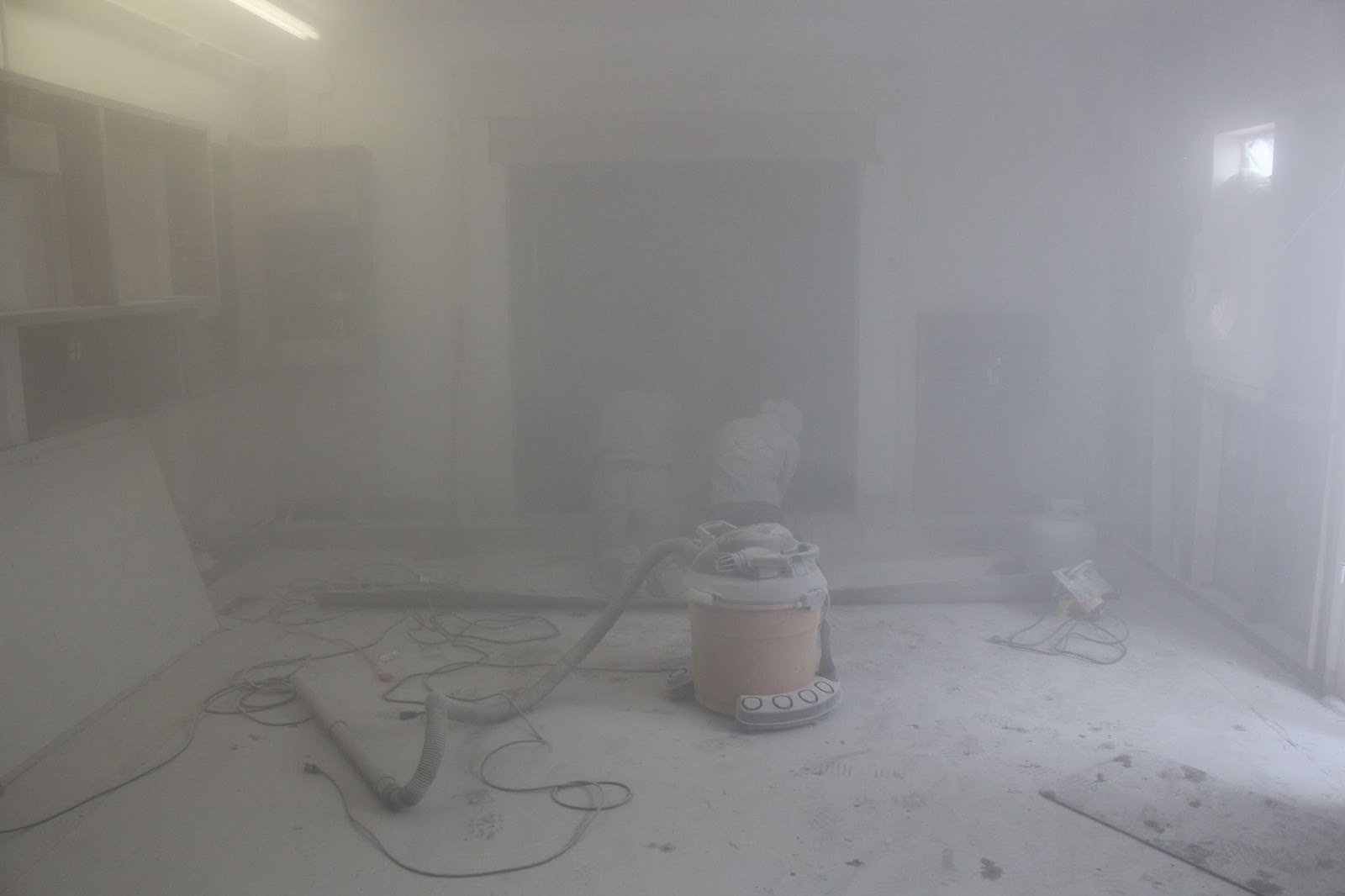 Last weekend, Rog cut the opening in the wall from what will be the main kitchen to the baking room. There was a concrete curb foundation that needed to be cut out, and our two young bread-baker prospects (that will be another post)  offered to help cut the concrete out today.  When I came out to take a photo of the progress this afternoon, it was a bit dusty in there! 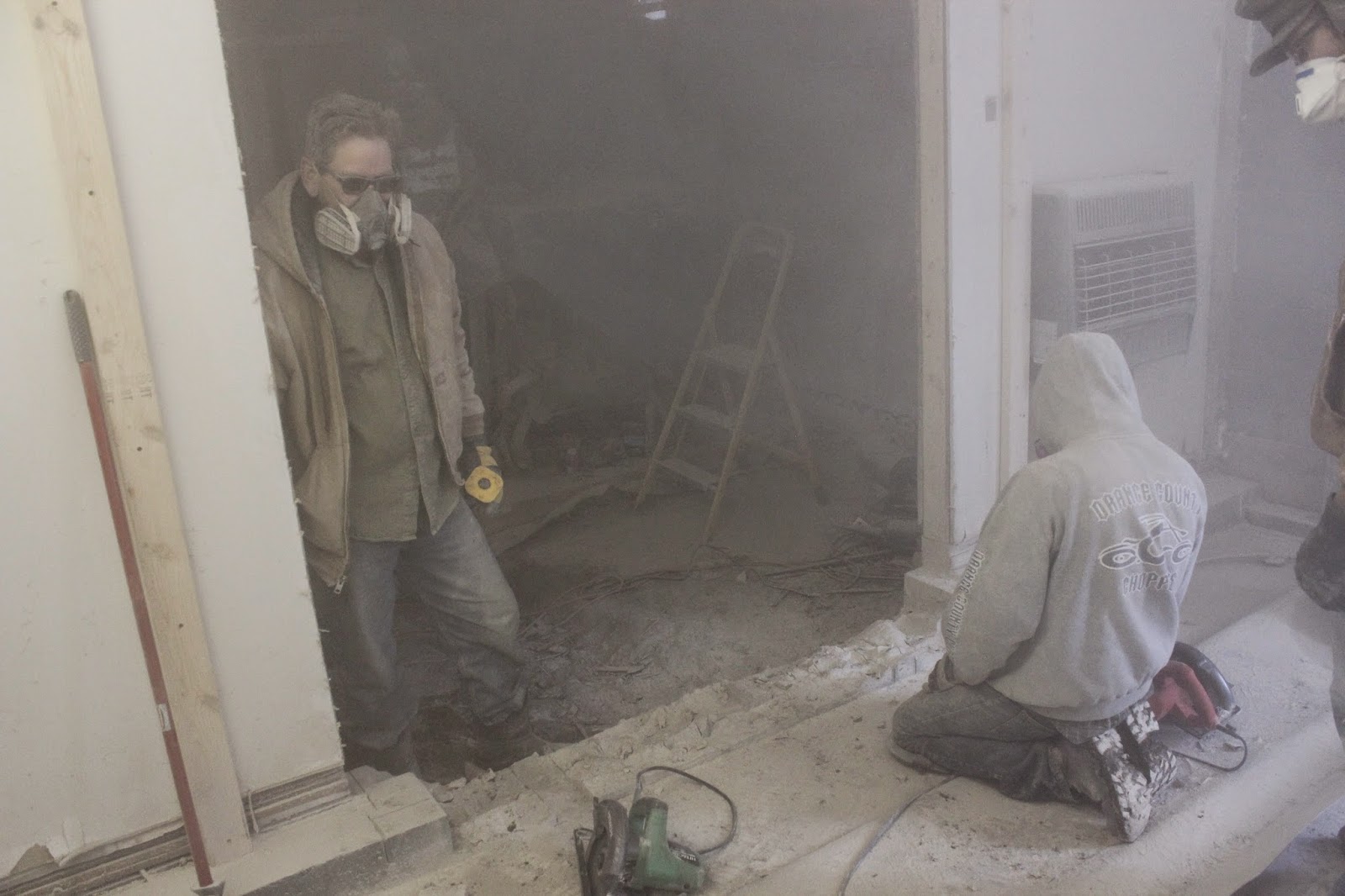 The opening is now ready to install the beautiful French doors! Well, after the dust is cleaned up. 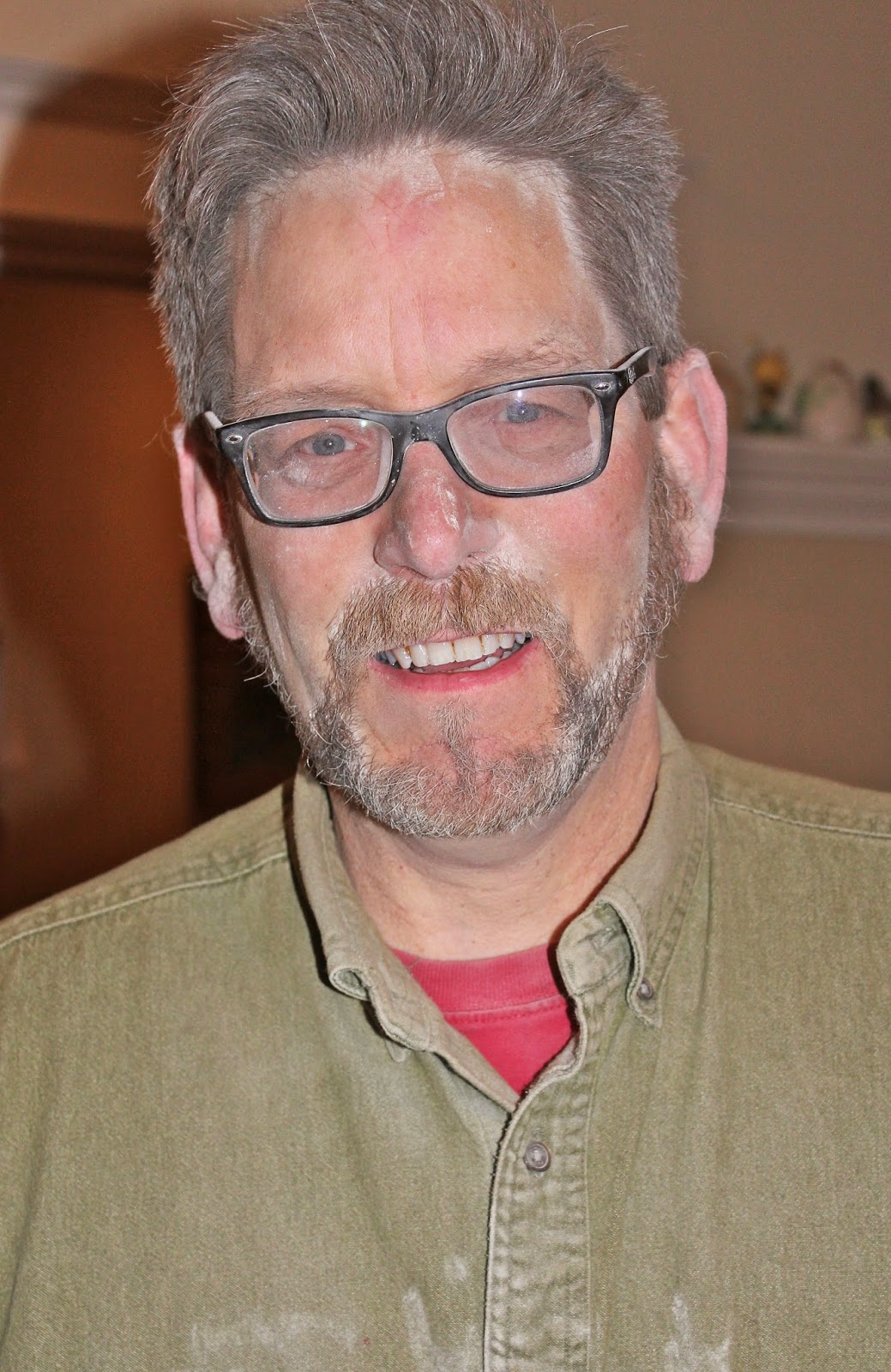 Dust-covered Rog smiling after a very productive day’s work today. There is at least one more weekend's worth of messy concrete-sawing, to cut channels in the floor for the plumbing.  Then the plumber and electrician will be able to do their work, and THEN the fun part begins.
Posted by Susan at 7:37 PM 2 comments: 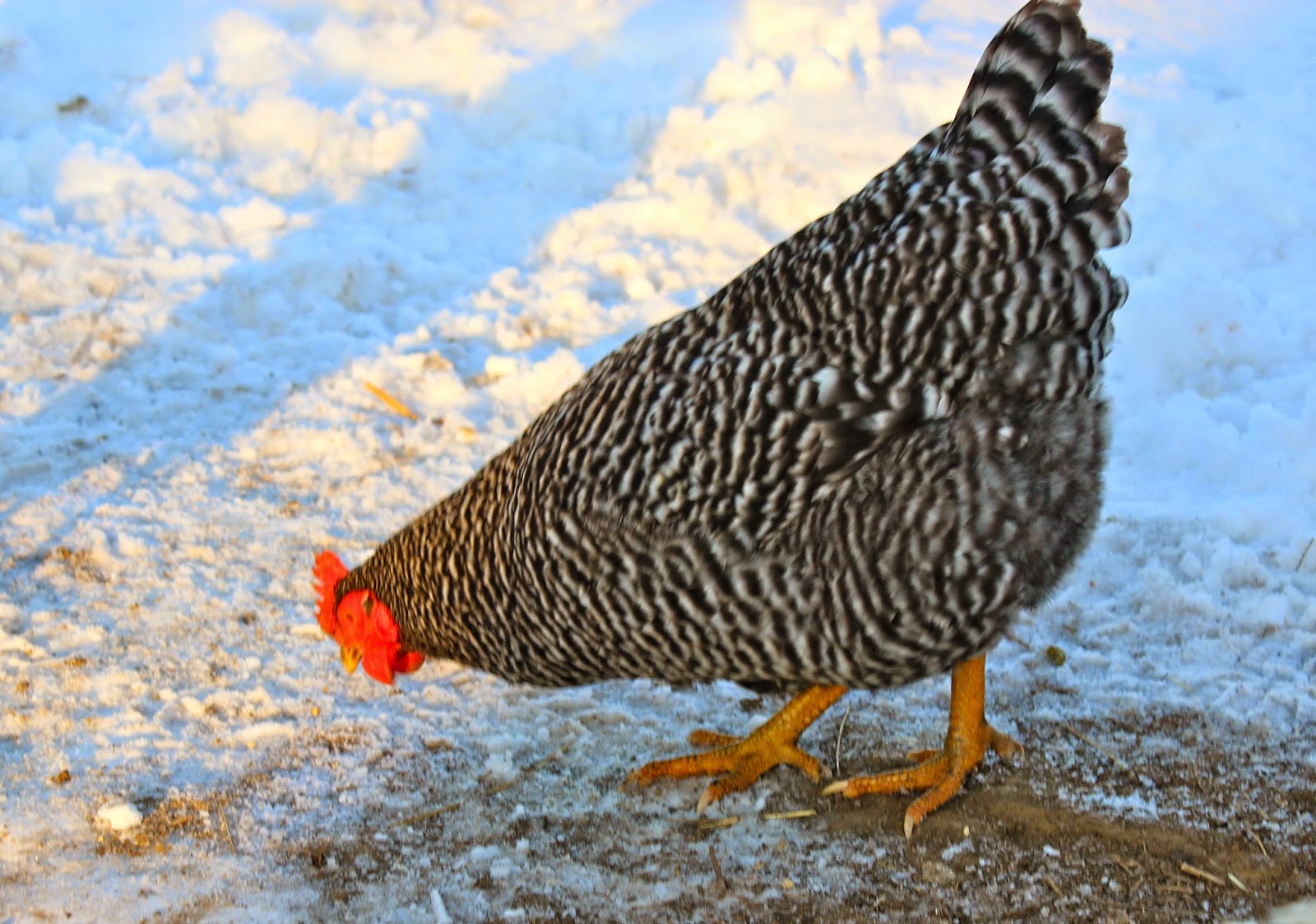 I haven’t  posted on my blog in so long - each day passing makes it more daunting to think about catching up. So, I have decided to  just dive in. Perhaps it will be a bumpy transition from my last regular posts, two months ago or more, until now, but I will try not to be too abrupt.

After a stretch of  quite cold weather, today was sunny and considerablywarmer, mid 20 degrees F.  I let the chickens out of the coop this afternoon and they were very happy. 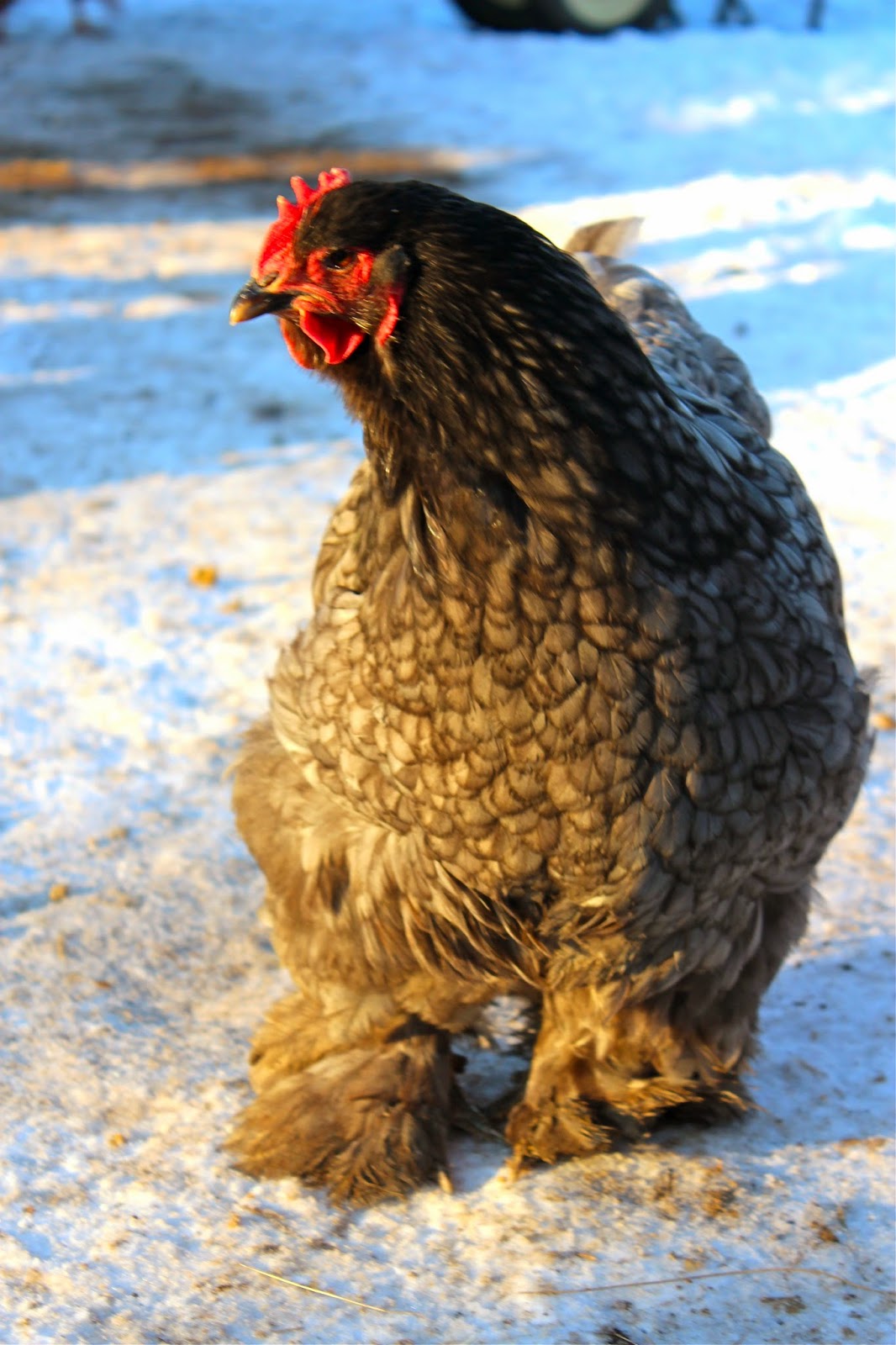 The big blue cochin hen with her fluffy feathered legs. 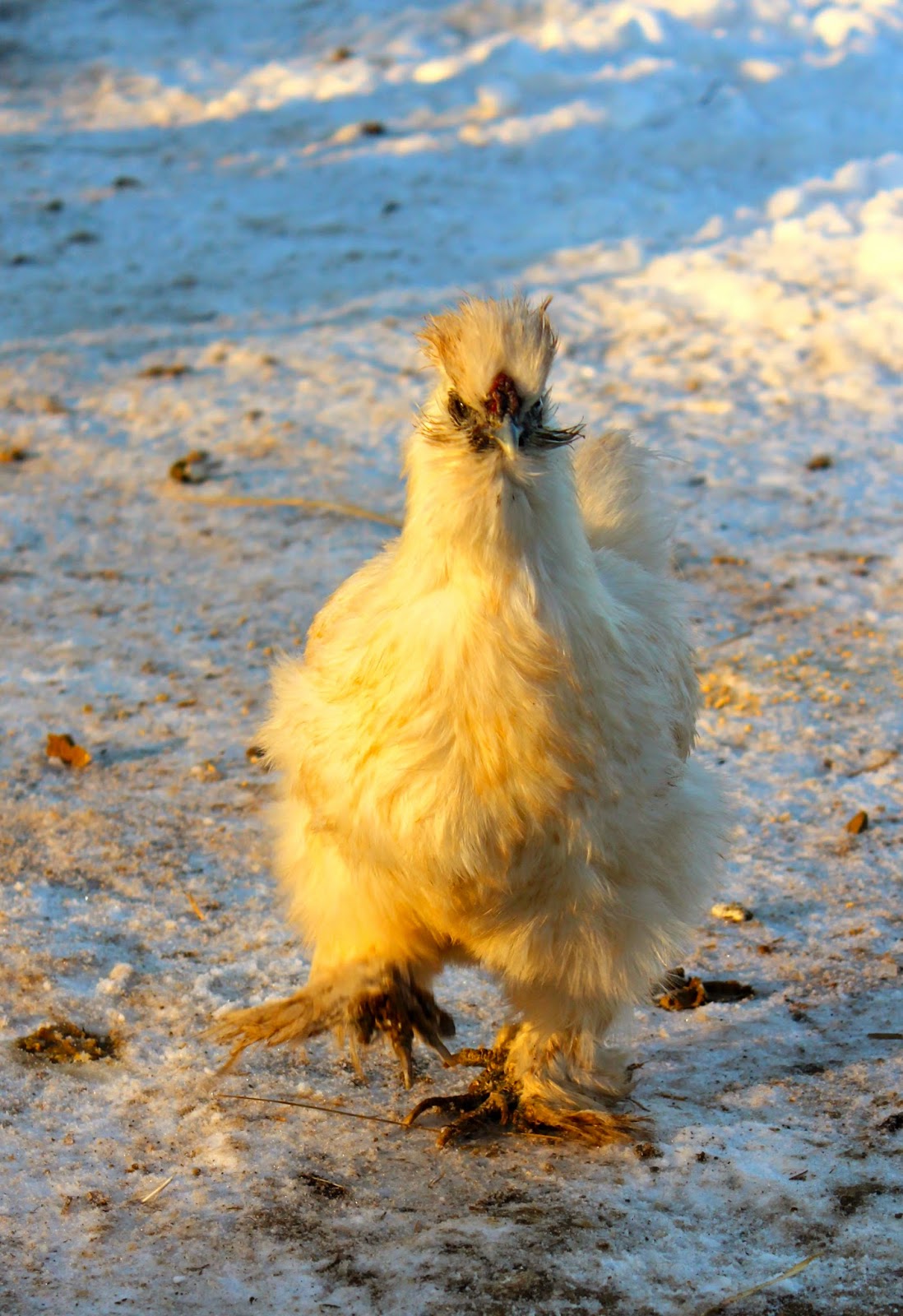 The little white silkie is my buddy, after  several mornings bringing her inside to eat breakfast with me and thaw out her frozen-shut eyes.) She came running to me to see if I had a treat for her. I didn’t, but of course I found one quickly. 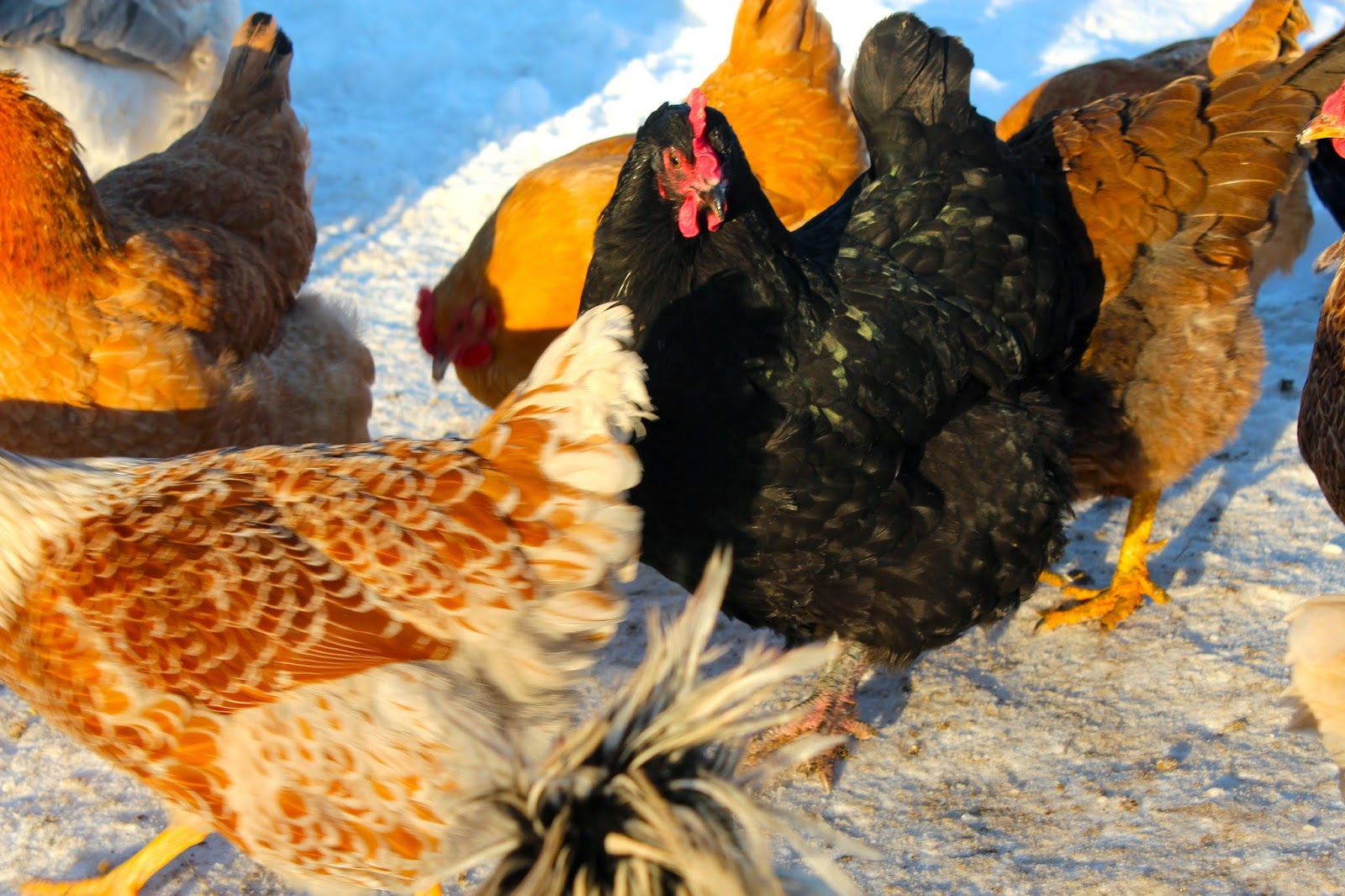 Last November, neighbors brought us a dozen beautiful Black Australorp hens and two roosters. They have integrated into our flock well. They still kind of hang out together in a sub-flock, but there doesn’t seem to be any animosity between them and the  other chickens. They are so beautiful silhouetted against the snow. 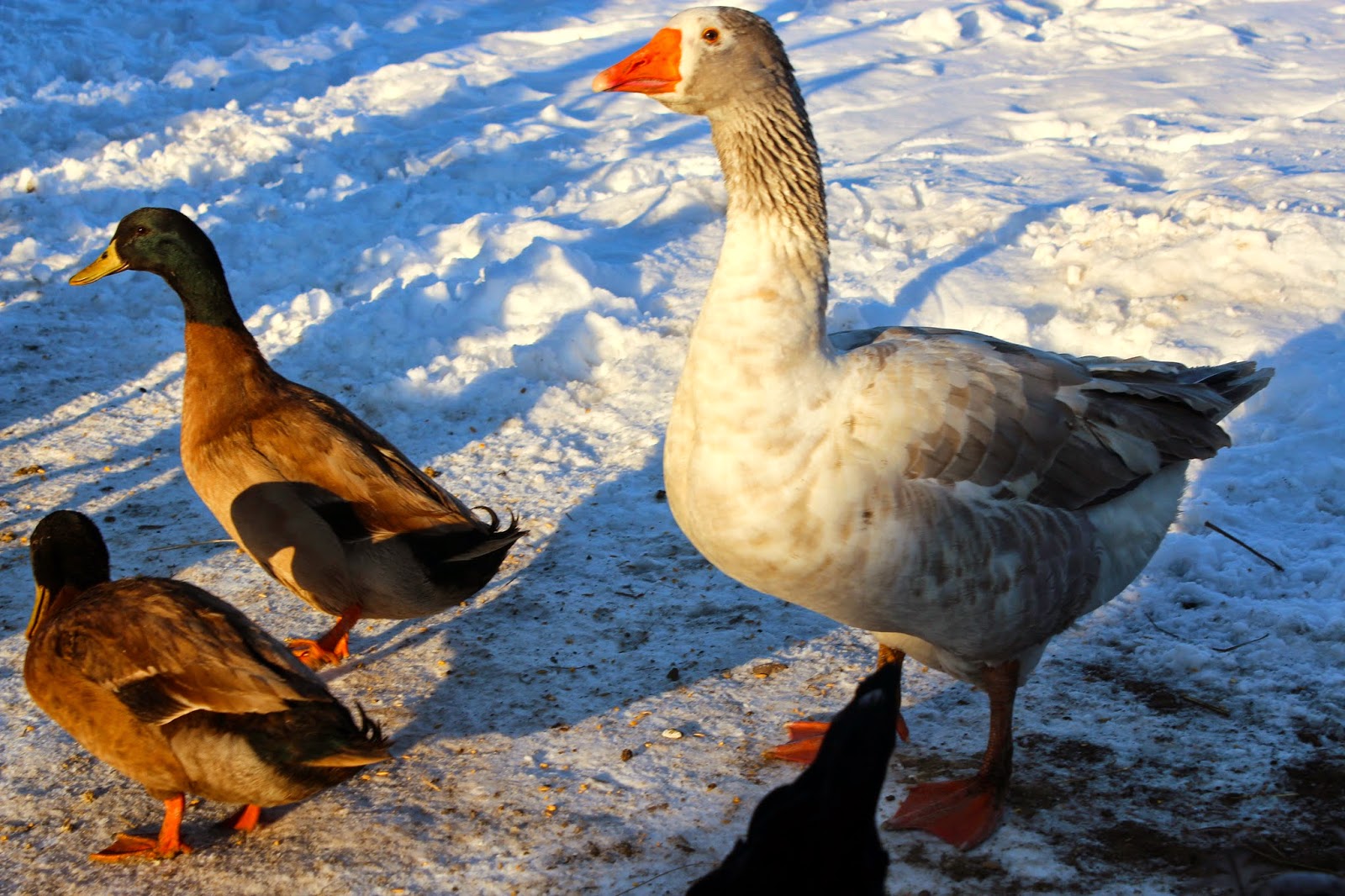 Lucy the goose is queen of the coop. The ducks are her minions. 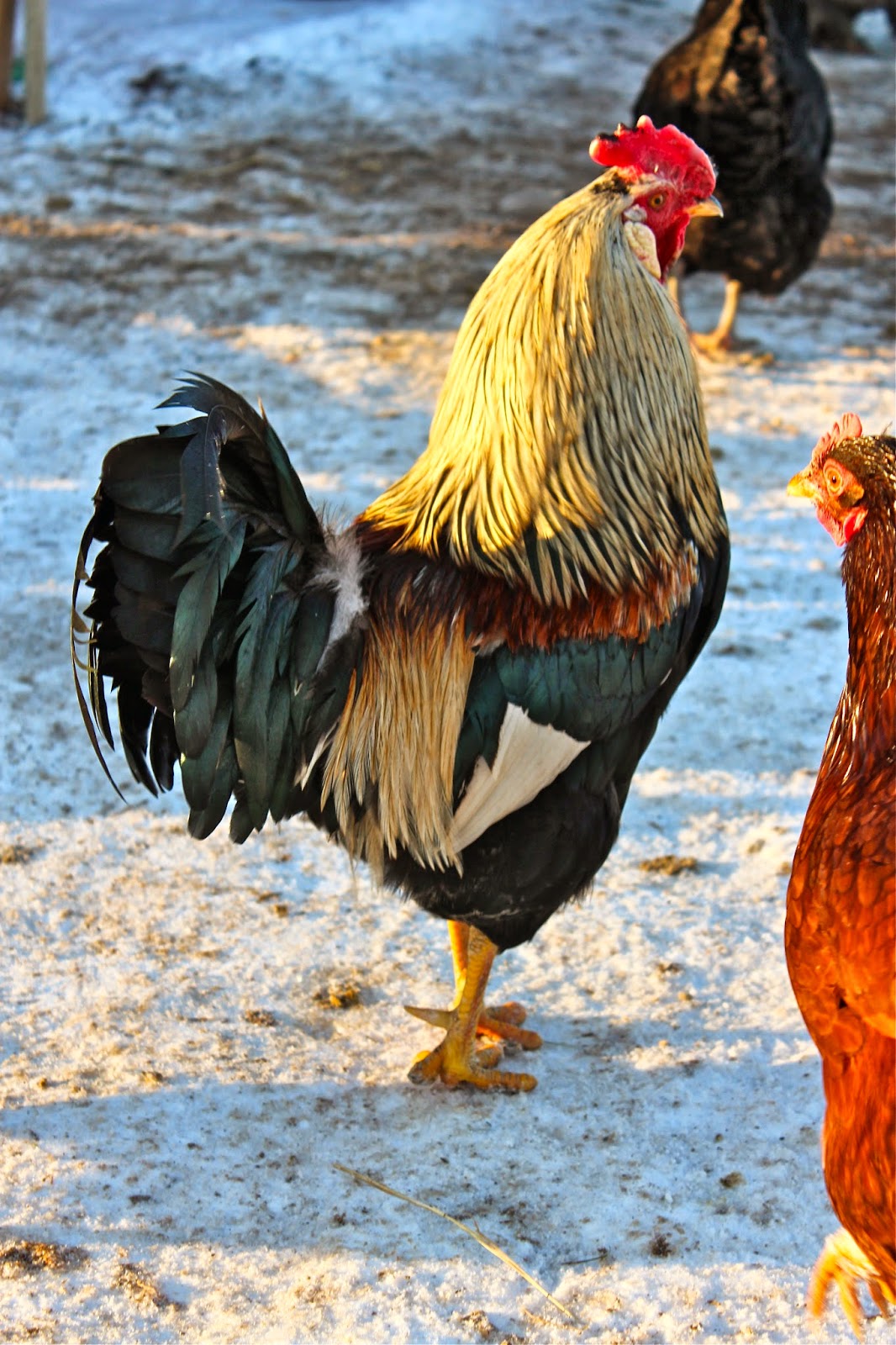 One of the pretty roosters who is a grandson of Knickerbocker, our favorite Welsummer rooster, and Lacey,  an Americauna hen. We still have too many roosters. 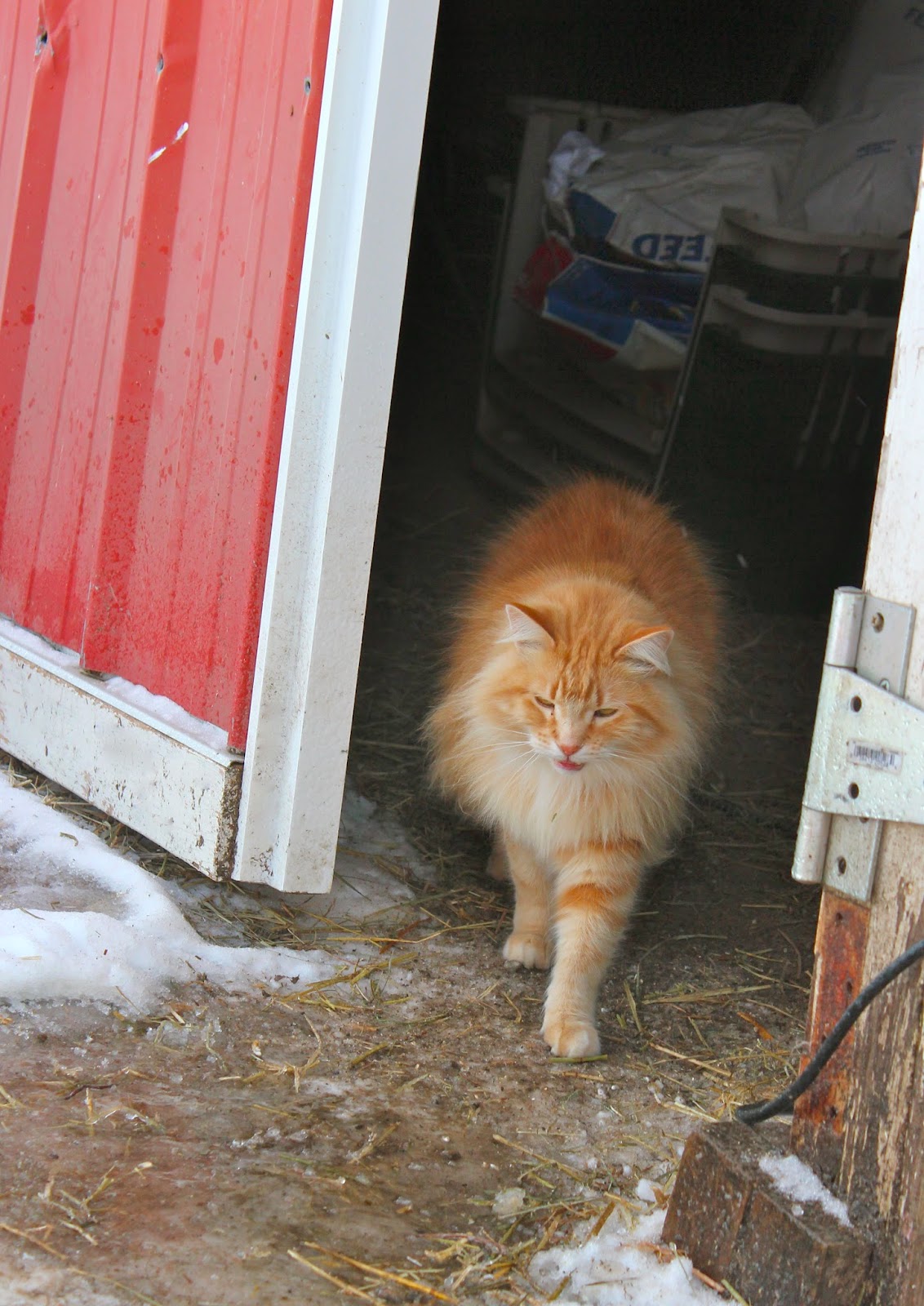 Orange is pretty much a house cat in the winter, but he spent the day outside. 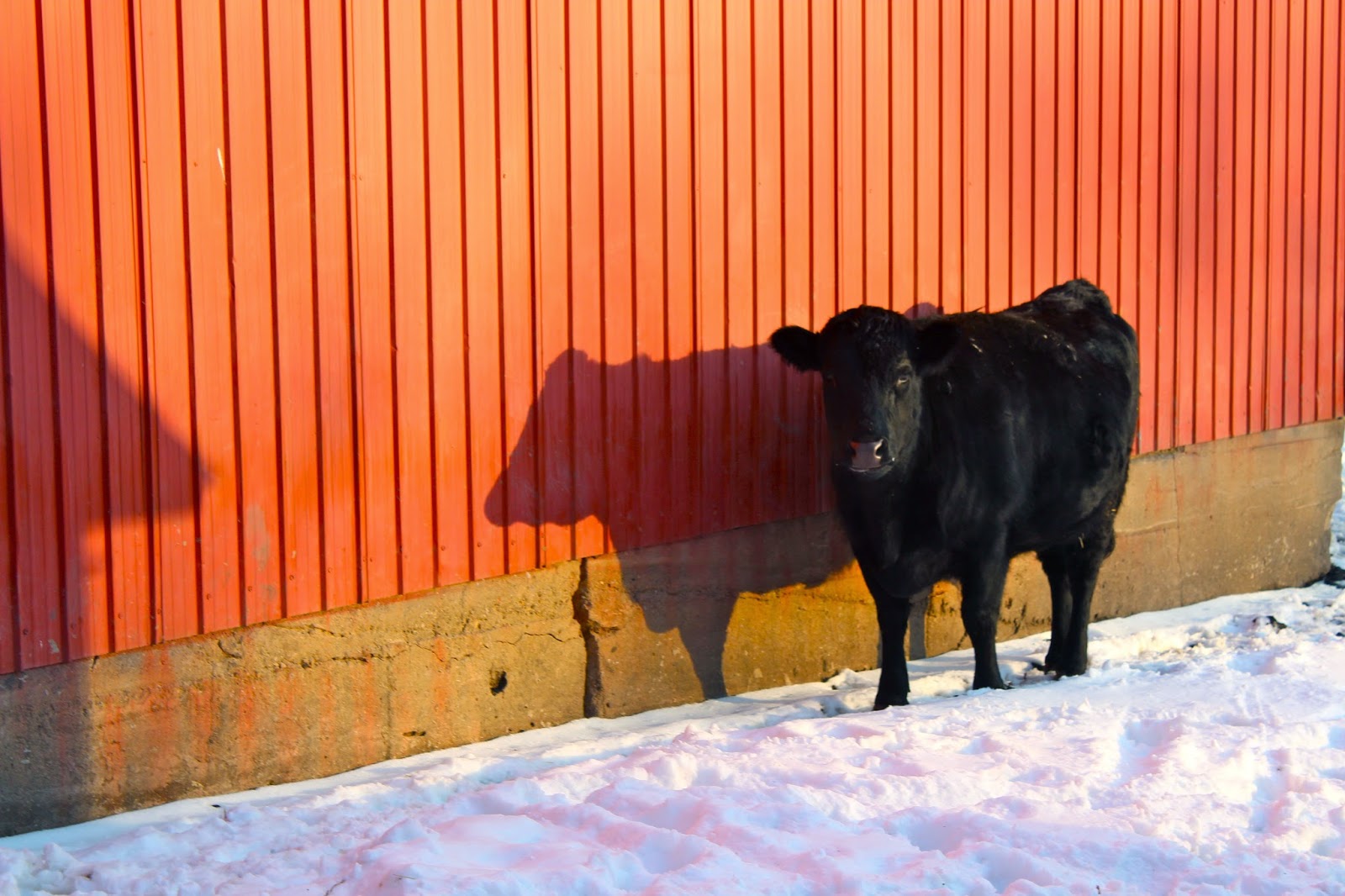 Jitterbug, soaking up the sun. 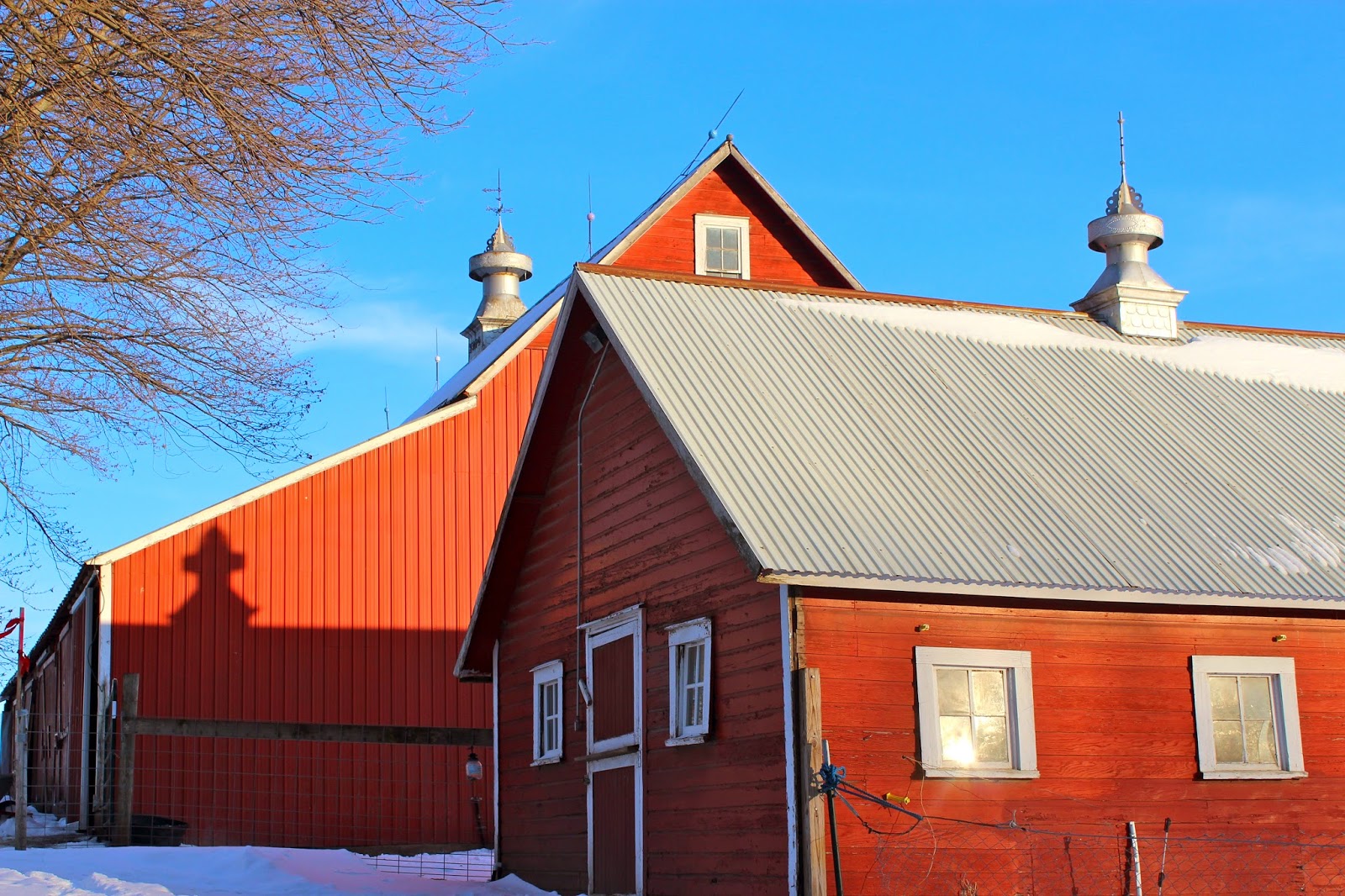 Shadows of the late afternoon sun low in the sky created a third cupola image in the shadows.

Something about a blue sky just makes you smile!
Posted by Susan at 5:54 PM 2 comments: