February is for "F" 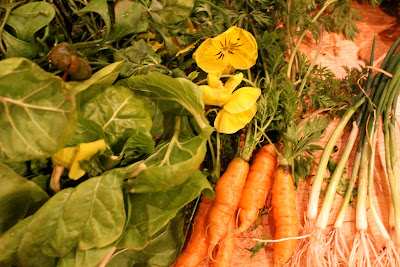 Food.  Amazingly, we are still harvesting veggies from the high tunnel! Tonight, in fact, our supper was a wonderful salad made from our own, spinach, chard, kale, scallions, carrots, and pansies, plus hard boiled eggs courtesy of our chickens and roasted beets purchased from the farmers market. Localvore galore! 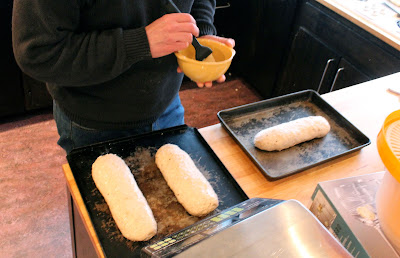 Today was sunny but it has been  quite foggy lately, the air as thick as pea soup... which put me in the mood for split pea soup. So last weekend, I made a huge pot of split pea soup and Rog made several loaves of multigrain sourdough bread. Winter comfort food. 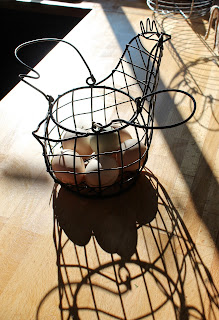 The chickens are up to about 15 eggs per day production now, so we have been making deviled eggs,  quiches, French toast, omelets... 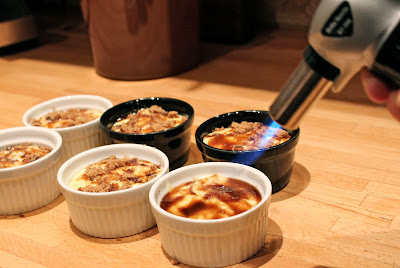 When we were blessed with abundant cream from  LaFonda we  often indulged in creme brulee, but since we have store-bought milk these days, we invented "pudding brulee." On top of a delicious homemade vanilla pudding (another egg-using  strategy) we sprinkle brown sugar and a drizzle of brandy, then caramelize with the torch. A darn tasty, comparatively guilt-free version of creme brulee. 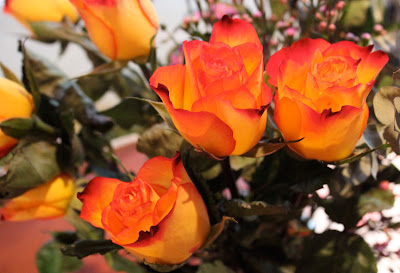 Flowers
Last week I called Rog at work to tell him all my paintings were finally finished, varnished,  wired and delivered for my art exhibit. When he came home from work, he surprised me with a bouquet of fiery, celebratory  roses!
What a sweetheart!

The art opening was Friday night.  We greatly appreciate the support of  everyone who attended and made it such a fun evening. Both Vera and I even sold some works.  My designated photographer forgot the camera, so I don't have photos, but it was a wonderful crowd and great food. Thank you, Marie and the Crossings gang! 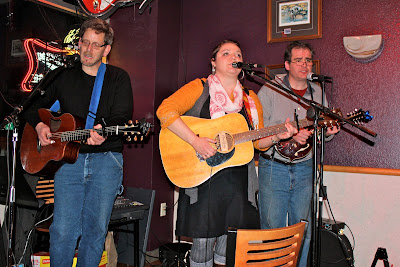 Folk Music
While I have been painting like crazy, Rog has been doing some serious singing.  The Volunteer Tomatoes had their debut  performance at Daniel's in Kasson 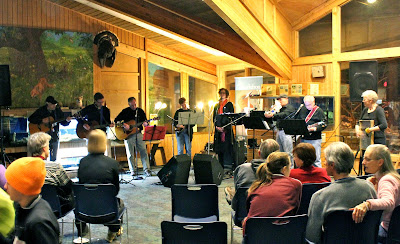 and The Nodding Wild Onions  performed at a Quarry Hill Nature Center event. 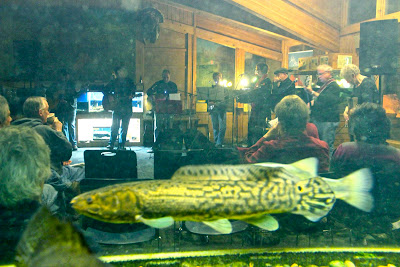 Here is a view of the band through the native fish aquarium at Quarry  Hill.  Both bands have a few more gigs coming up- I'll try  to get some video clips with actual music. 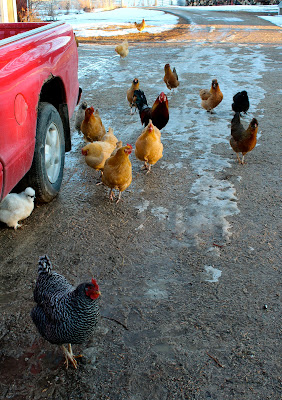 Fowl
Meanwhile, back at the farm, the chickens and guineas have been reveling in the unseasonably warm February weather. The duck especially loves the melting snow puddles. 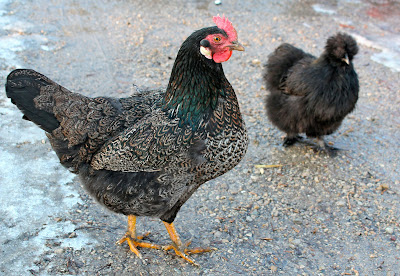 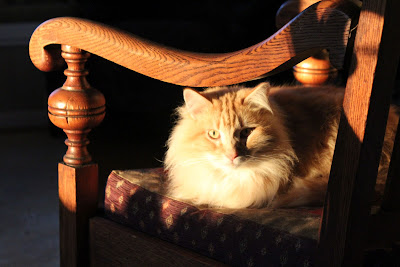 Feline
Orange basking in the late afternoon sun streaming through the windows.

You're so inspiring!! So I've passed on the Versatile Blogger Award to you!!
http://gzandco.blogspot.com/2012/02/awards.html

Congrats on your art opening!

And you've convinced me; I need a high tunnel. Fresh food in February? Can't be beat!

You two have sure been busy! Speaking of felines, did the stray end up being a pregnant female? And if so did she have kittens? He/she sure looked ready to 'splode!

I have been surfing on-line more than three hours lately, but I by no means found any interesting article like yours. It's beautiful value enough for me. Personally, if all web owners and bloggers made just right content as you probably did, the net can be much more helpful than ever before.
MANUAL TIRE CHANGER

I have been browsing on-line more than 3 hours these days, but I never found any interesting article like yours. It is lovely price sufficient for me. Personally, if all web owners and bloggers made good content as you did, the web will likely be a lot more useful than ever before.
!#: Sorel Women's Helen Of Tundra Boot... The Cheapest